COMPUTERS AND COMPUTER COMPANIES IN CHINA 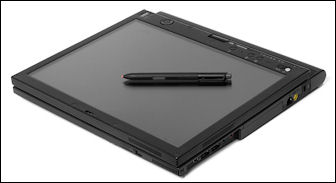 Lenovo tablet In 2020, it was estimated that there were around 400 million computers in China. This works out per to about 54.2 per 100 households. This is much less than the figures for cell phones and smart phones. There are over a billion smart phones in China and more smart phones and cell phones than the population of China. Most web applications in China are geared towards smartphones. Computers are generally seen as device for work.

In the the early 2010s a devise called the Red Pad was introduced by a company with links to China’s powerful Ministry of Information Industry. It was only available to cadres not the general public. AFP reported: “For the communist cadre who has everything, a shadowy Chinese company is offering a $1,590 tablet computer called the “Red Pad” reserved for the nation’s top officials. The Red Pad, called the “mobile business platform” for officials, has features such as access to internal documents, the musings of top leaders and a database of government contact information. The pricey device was widely mocked by Chinese netizens, who among other things said only government officials could afford the tablet since they have access to state funds and illegal sources of income gained through their powerful positions. A seller on China’s largest online shopping platform Taobao was offering a “Black Pad” at a cheaper $160 price, saying it beat the Red Pad “used by corrupt officials”. [Source: Agence France-Presse, January 20, 2012]

Statista reported: Based on the 2020 results, Lenovo was China's leading computer manufacturer. The company generated a revenue of almost 428 billion yuan. Most companies on the list were able to increase their revenue in 2020. With the high prevalence of home office policies around the world, the demand for additional computer equipment was high.

Growth of the Computer Market in China

In August 2011, AP reported: “China eclipsed the United States as the world’s largest personal-computer market in the second quarter of 2011, and was set to capture the full-year title in 2012. PC shipments in China rose to about 18.5 million units in the quarter, compared to 17.7 million units in the United States, research firm IDC said. The shipments were worth $11.9 billion and $11.7 billion, respectively. During the April-June 2011 period, China’s market share of global PC shipments increased to 22 percent, surpassing the 21 percent share held by the United States. The data includes desktops, portables and mini-notebooks, but not handhelds, such as tablets. [Source: Associated Press]

Oracle, Motorola, Intel, Siemens, IBM, General Electric and Nokia all have had research facilities in China. Programmers in Beijing and Guangzhou produced code for computer games designed in Taiwan and Japan. On of the biggest fear that foreign companies have working in China is that their patents ideas and copyrights will be stolen.

According to a survey in 2005, China was the third leading producer of spam after the United States and South Korea. It produced 15.7 percent of the world’s spam, up from 6 percent in 2004. The United States produces 26.4 percent. Many of the spam e-mails luring people to online dating services and adult-oriented sites that reached Japan originated in Chinese servers. China was the source of a number of viruses. In 1989 the "Li Ping" virus asked computer user if they liked "Li Peng" if the answer was yes the computer’s hard disk was wiped out.

For a long the computer manufacturing sector in China was known mainly for supplying cheap labor for computer parts and computer assembly and pirating profitable computer software. According to one report 98 percent of the software used in China in the 2000s was pirated, accounting for billions of dollars in losses to Chinese and foreign software developers every year. The latest video games and Microsoft software are still often widely available in pirated form.

U.S. software companies, Microsoft, WordPerfect and Autodesk won a landmark victory in Chinese courts against a Chinese company — Juren Computer Company in Beijing — that was pirating the company's software. Juren was ordered to pay the equivalent of $53,600 damages and stop pirating software. The ruling many hoped would set a precedent allowing foreigner companies to punish other pirates and counterfeiters. It didn't much impact

Sony released Playstation II much later in China than it did in other places partly over concerns about pirating. A report from an investigation by Sony released in 2004, revealed that at least 10 pirating operations in China were producing 50,000 Playsation consoles a year. In one case the consoles were assembled at prison. In some cases the factories were raided and their owners were fined but the factories quickly resumed operation.

These pirating is still a problem but less one than before as Chinese companies increasingly want and demand protection for their patents and copyrights.

CRACKING DOWN ON COUNTERFEIT GOODS IN CHINA factsanddetails.com

China was regarded as one of Microsoft greatest potential markets. In the mid 2000s, it formed a joint venture with a Shanghai company controlled by the son of former Chinese President Jiang Zemin. It was very active fighting piracy in China and was snubbed by Beijing, which is pursued the use of Linux software to undermine Microsoft’s dominance in the software market.

In an effort to penetrate the market in China, Microsoft developed the Venus project: a box with software and hardware that allowed a VCD player and similar device to display Chinese-language Internet on an ordinary television. Bill Gates himself unveiled the project in Shenzhen in April, 1999.

Microsoft complied with demands by Beijing to restrict access to controversial sites to users of its search engine. In January 2006, Microsoft shut down a popular blog that addressed human rights issues in China and then became a target of attacks. Microsoft’s search engine, Bing, has not done very well in China. Although Microsoft spent years building a presence in China and working with the Chinese government, the company’s online offerings have fared poorly.

Microsoft has an important research and development center in the Haidian district of Beijing. It was opened in 1998 to take advantage of the huge pool of gifted scientists and researchers. The company has been were able to attract large number scientists from government researcher facilities which do not pay so well. . Chinese software engineers have been at the center of developing software for Microsoft that can take handwritten documents and covert them to text on a computer. The technology is particularly useful for writing Chinese which has no alphabet and has been difficult to adapt to keyboards.

Beijing complained that Microsoft may have been working with U.S. intelligence agencies to spy on China. Ethan Gutmann wrote in World Affairs, “The Chinese government set up an obscure entity known as the State Encryption Management Commission. Its directive was that all Western encryption products in China — i.e., software, DVDs, laptops — must be registered, inspected, scrutinized, possibly downloaded, and, if necessary, confiscated. The target was Microsoft’s source code, suspected to contain a Trojan horse for U.S. intelligence. Microsoft didn’t comply and the State Encryption Management Commission disappeared. Microsoft ultimately revealed its source code to Chinese officials, under what the company claims were controlled conditions.” [Source: Ethan Gutmann, World Affairs, May-June 2010]

In 2008, Microsoft was being investigated to see if it violated China’s Antimonopoly Law. Tang Jun, the millionaire former head of Microsoft China and something of a national hero, falsely claimed to have received a doctorate from the California Institute of Technology. [Source: Andrew Jacobs, New York Times, October 6, 2010]

Microsoft has had a hard time in China. Former CEO Steve Ballmer reportedly told employees in 2011 that, because of piracy, Microsoft earned less revenue in China than in the Netherlands even though computer sales matched those of the United States. [Source: Reuters, May 20, 2014]

In 2014, Windows 8 was banned on all new government computers, amid reports alleging security concerns, and Microsoft was investigated by Chinese government which targeted its "monopoly" of the country's operating systems market. “"We aim to build products that deliver the features, security and reliability customers expect, and we will address any concerns the government may have," Microsoft said. [Source: AFP, July 29, 2014]

In 2016, Microsoft was criticized in China for pushing users to mandatorily upgrade their operating systems to Windows 10, Xinhua reported. Posts critical of Microsoft on microblog site Weibo relating to the Windows 10 upgrade, which Microsoft users must switch to, have grown to over 1.2 million in number, it said. “"The company has abused its dominant market position and broken the market order for fair play," Xinhua quoted Zhao Zhanling, a legal adviser with the Internet Society of China, as saying. [Source: Reuters, May 27, 2016]

Reuters reported: “He said users or consumer protection organizations had the right to file lawsuits against the company as Microsoft had not respected users' right to know and choose, and may eventually profit from the unwanted upgrades. Microsoft said in an emailed statement it was helping customers schedule the software update, previously labeled "optional" and now "recommended", and users had the option to cancel or reschedule. In 2015, Microsoft said it would offer free upgrades of Windows 10 to all Windows users, regardless of whether they are running genuine copies or not.