PANCHEN LAMA: HISTORY, STATUS AND THE 10TH ONE

The Panchen Lama is the second highest religious figure in Tibet after the Dalai Lama. Regarded as a reincarnation of Amitabha (Buddha of Infinite Light), he is the head of a branch of Buddhism that rivals the branch headed by the Dalai Lama, and was promoted by Beijing after the Chinese invasion in 1959 as the sole leader of Tibetan Buddhism. [Source: Seth Faison, New York Times; Isabel Hilton, New Yorker, August 23, 1999]

Early History of the Panchen Lama

According to the National Palace Museum, Taipei: In the 15th century, Tsongkhapa (1357-1419) founded the Gelug School, and its lineage was in the early days passed from masters to disciples. Two disciples of Tsongkhapa, Gedun Drupa (1391-1474) and Kedrup Je (1385–1438), were posthumously identified as the First Dalai Lama and the First Panchen Erdeni, respectively, which became the two foremost living Buddha lineages in the Gelug School. Panchenis short for Pandita Chenpo, meaning "Great Pandita." The word Pandita is derived from the Sanskrit Paṇḍita, which means "Master of the Five Wisdoms."

The lineage of the Panchen Erdeni began with the Fourth Panchen Losang Chö kyi Gyaltsen (1570-1659), who received the title from Güshi Khan (1582-1654), leader of the Khoshut Mongols. The three immediate predecessors of Losang Chö kyi Gyaltsen were posthumously recognized as the First, Second, and Third Panchen Erdeni. The Qing dynasty saw six Panchens, from the Fourth to the Ninth. 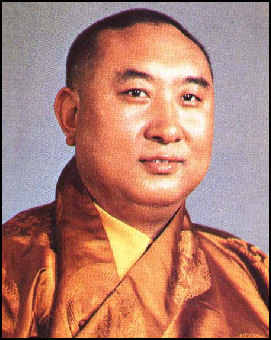 10th Panchen Lama The tenth Panchen Lama was an enormous man with a cherubic face, a mysterious smile and “a voice that could range from the deepest rumble to a high-pitched squeal in a single sentence." In some parts of Tibet he is admired as much as the Dalai Lama and his picture is as ubiquitous as Mao’s in many parts of China. For a while the tenth Panchen Lama was considered a traitor by Tibetans but now is widely regarded as doing the best he could under difficult circumstances.

The tenth Panchen Lama was born in Amdo, a Tibetan area incorporated into Qinghai Province. His birth name was Gonpo Tseten. His father was the headman of village named Wendu. After the ninth Panchen Lama died he was selected along with other boys as a possible successor. He was not given much of a chance to be the Panchen Lama but after three of the other boys died he was chosen.

After the Dalai Lama left the tenth Panchen Lama was name a member of the Communist Party’s Central Committee and from then on was regarded by many Tibetans as a Chinese puppet. Even so he was accused of being a traitor by Beijing in 1964 after he wrote a letter to Mao Zedong complaining about Chinese policy in Tibet. He was sent to prison for eight years, much of its spent in solitary confinement, dragged out and publically humiliated in mass rallies in the Cultural Revolution, and spent another six years under house arrest. For a while he was thought to dead. Through it all he fought for preservation of Tibetan language, culture and religion. Near the end of his life he began expressing anti-Beijing views.

The tenth Panchen Lama lived in Beijing until he died suddenly at the age of 50 at his palace in Tashilhunpo monastery in January in 1989 during a visit to Tibet. The official cause of death was a heart attack but there were rumors that he was poisoned. According to some rumors he was poisoned to death by the Communists (the night of his death some mysterious Chinese men showed up in his room) but his fondness for eating made a heart attack seem plausible. His body was embalmed and gilded and interred in a mausoleum in Tibet. Photographs of the body have been widely circulated. 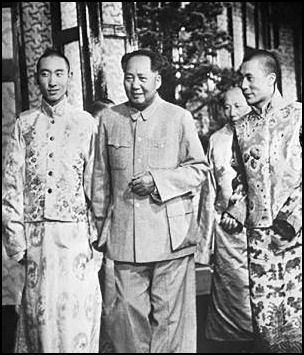 After the tenth Panchen Lama was released from house he did something that was previously thought to be unthinkable: he married. In 1979 he wed Li Jie, a pretty Chinese girl who was studying to be a doctor and was from a family that had connections with the Kuomintang and the Communists. At this stage of his life the Panchen Lama was considered something of a playboy and was known for his fondness of cars.

The tenth Panchen Lama had a daughter, Yabshi Pan Rinzinwangmo, Born in 1983 and known by the name of Renji, she lived at the house of the actor Steven Segal in the hills above Los Angeles for a while and majored in political science at American University in Washington D.C. Although the Panchen Lama is not a hereditary position many Tibetans treat her with great reverence as if she were his heir. Some refer to her as “Princess.”

Renji loves shopping and pop music and is particularly into Prada. She attended an exclusive private school with a group of friends who traveled around in private jets and thought nothing of running up bills of over a thousand dollars at the discos they went to. For a while he was into motorcycles and was an item with a boy expelled from her school for smoking..

Renji has emerged as powerful presence in Tibet. On her visits to Tibet she has been mobbed. She told The New Yorker, Crowds ‘stood outside wherever I was, waiting for me. At the beginning it was a little chaotic. They wanted to offer khatags and touch me. Renji has meet with Beijing choice for the new Panchen Lama. She refuses to bow to him. If she did it could be used an important affirmation of the government’s position that he is the new Panchen Lama.

Tashilhunpo Monastery and the Panchen Lama

Tashilunba Monetary (in Shigatse) contains the largest Gelug (Yellow Hat) Sect Temple in Tibet and the home of the Panchen Lama. Situated on the slopes of Neseri Mountain, it contains a large Palace Hall and a large Scripture Hall. The latter contains the 80-foot-high Maitreya, the largest copper Buddha in the world. Records show that this Buddha was cast from 6,700 ounces of gold and over 115,000 kilograms of copper. At its peak the monastery contained 4,000 monks, now it only has 600. In 1989, a giant gold reliquary chorten was constructed for the body of the 10th Panchen Lama.

Also called the Heap of Glory, Tashilhunpo Monastery was founded in 1447 by the First Dalai Lama. According to historical documents, the Tashilhungpo Monastery was built under the supervision of the first Dalai Lama Genden Zhuba, a disciple of Master Tsongkhapa (Zongkapa), founder of the Gelug Sect (Yellow Sect). When the fourth Panchen Lobsan Qoigyi, titled by the Qing (1644-1911) emperor, became the abbot, it was expanded to a large scale. Since then, the monastery has become the residence of the Panchen Lama.

Pagoda for the 10th Panchen Lama


First Panchen Lama According to the Chinese government: The 10th Panchen Erdeni Qoigyi Gyaincain passed away on an inspection tour to Xigaze on January 20, 1989. Three days later, the State Council issued a decision to build a sacrificial hall to enshrine the body of the 10th Panchen Lama for people to pay their respects and to remember his love for the country and his devotion to Tibetan Buddhism. On an inspection tour to Tibet in 1990, President Jiang Zemin paid a special visit to the Tashilhungpo Monastery to the memory of the 10th Panchen Lama and inquired about the construction of the hall. With careful choosing of the design, the construction started on September 20, 1990. The state allocated 64.24 million yuan of special funds, and 614 kilograms of gold and 275 kilograms of silver to be used in building the hall. The project lasted three years. A grand inaugural ceremony was held on September 4, 1993 and the hall was named Shesongnamgyi, meaning sacrificial hall for the three sages of Paradise, Human World and Nether World. [Source: China Tibet Information Center, zt.tibet.cn]

The naming itself was a serious matter. Four names were submitted, and each was wrapped inside a zanba in the shape of a ball. The four balls were put in a bottle before the body of the Panchen Lama. After three days of sutra chanting, a ball jumped out of the bottle when it was being shaken. Peeling off the zanba, the name appeared: Shesongnamgyi. The 35.25-meter-high sacrificial hall covers a floor space of 1,933 square meters, and its wall is 1.83 meters thick. The style of the building is at once traditional and modern, displaying both ethnic and religious features.

The 11.55-meter-high pagoda covers 253 square meters, its exterior covered with a layer of gold and inlaid with pearls and precious stones. On the pagoda are 818 bags, which hold 24 different kinds of stones, altogether 6,794 pieces. Strictly in accord with religious rituals, the interior of the pagoda is composed of three storeys. The first storey holds barley, wheat, rice, tea leaves, salt, various kinds of dried fruits and candies, sandalwood, various medical herbs, silk and satin, elaborately carved saddles, pilose antlers, rhinoceros horns, silver, pearls, stones, kasaya and Tibetan costumes. The second storey holds Tripitaka, classical works by the three founders of the Gelug Sect, works by all the Panchen Lamas in history and Buddhist scriptures written with gold powder ink. The top storey has Buddhist scriptures and Buddha statues. On August 30, 1993, the body of the 10th Panchen Lama was moved into the pagoda. The body was first put in a sandalwood bier, which was then put into a specially made safety cabinet and finally moved into the Precious Bottle in the pagoda. At the entrance is a life-size statue of the 10th Panchen Lama. Around the body are a variety of religious articles, such as kasaya, tangka painting scrolls, Buddha statues and scriptures.

Chinese Take on the Panchen Lama

According to the Chinese government: The “Panchen E'erdeni (the Panchen Lama) is also one of the titles of the highest leader and Living Buddha of the Gelu Denomination in Tibetan Buddhism, which is called incarnation of Buddha of Infinite Light. "Pan" is abbreviation of Sanskirt "Panzhda" (scholar). "Chen" means "great" in Tibetan, and "panchen" is "great scholar". "E'erdeni" is Manchu language, and it means "treasure". [Source: Liu Jun, Museum of Nationalities, Central University for Nationalities, kepu.net.cn ~]

“In the second year of the Shunzhi period in the Qing dynasty (1654), the leader Gushi Khan of the Mongolian Heshuote tribe, who ruled the central Tibet (the former and latter Tibetan), respectfully addressed Zpngkaba's forth disciple Luosangquejijianzan the title of "Panchen Bokeduo"("Bokeduo" is Mongolian which is an honorific title for wise and heroic person), asked him to manage the Zhashilunbu Temple, and delimited a part of the Latter Tibetan in to his administration. So the title "Panchen" comes from this. Luosangquejijianzan was the Forth Panchen (the former three Panchens were admitted posthumously by later generations). ~

“In 1731, Emperor Kangxi of the Qing Dynasty conferred the title "Panchen E'erdeni" upon the Fifth Panchen Luosangyixi, granted him gold book and gold seal, and confirmed Panchen's position in the Gelu Denomination. From then on, it became an established rule that the incarnation of every Panchen E'erdeni should be conferred by the central government. In the sixth year of the Yongzheng period (1728), the Qing government followed the old case of Gushi Khan, and delimited again the jurisdiction area of Panchen in the latter Tibet, which made Panchen become political and religious leader of Tibet as Dalai. After the democratic reform in 1959, bound of politics and religion was strictly distinguished, and Panchen's feudal privilege in politics was abolished. The Panchen now is the 11th. ~