Effects of wearing a face mask

Although not identified until later, China’s first case of a new, highly contagious disease, severe acute respiratory syndrome (SARS), occurred in Guangdong in November 2002, and within three months the Ministry of Health reported 300 SARS cases and five deaths in the province. By May 2003, some 8,000 cases of SARS had been reported worldwide; about 66 percent of the cases and 349 deaths occurred in China alone. By early summer 2003, the SARS epidemic had ceased. A vaccine was developed and first-round testing on human volunteers completed in 2004. [Source: Library of Congress, August 2006]

SARS killed 349 people in China in 2002 and 2003. Around 5,500 people got the disease. Most of the cases were in Guangdong and Beijing with cases also reported in Shanghai, Shanxi, Inner Mongolia, Hunan, Sichuan, and Guangxi. News of SARS appeared in Hong Kong, Taiwan and Thailand before much news came out of China even though the disease originated in China. By the time the government finally released news about it SARS had spread all over China.

During the SARS outbreak growth in China slipped by three percent. Countries around the world slapped restrictions on Chinese crossing their borders. Chinese students were banned from universities in the United States. The border between Russia and China was closed. Many airlines canceled fighting going into China.

Inaction and Cover Up of SARS in China 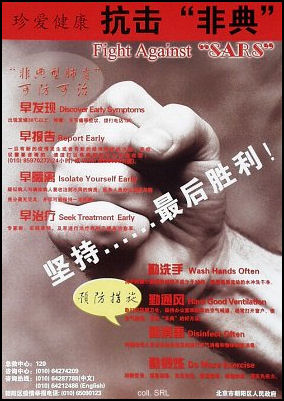 China was criticized for not doing more to stop the SARS outbreak and not releasing information about the disease in a timely fashion. Officials at the World Health Organization (WHO) were angry that more wasn’t done to determine the source of the SARS virus and study how it was transmitted between animals, including humans, in the early stages if the outbreak. After a number of cases were reported in the early stages of the outbreak, it seemed like that numbers of cases were tapering off. But that was not the case.

Authorities in Guangzhou province and Beijing covered up the disease after it first appeared in each of those places by under reporting or failing to reported SARS as the appeared in hospitals. The government reacted the way it did, some analysts have suggested, because it believes that maintaining social stability has precedence over the well being of individuals. Doubts were raised about the humanity of the government. There were even some calls for political reforms

Jiang Yanyoung, a high-ranking military doctor and Communist Party member, blew the whistle on SARS cover-up and in the process became a folk hero in China. In a letter addressed to top leaders, which was also released to the international news media, he reported that many Beijing hospitals, including the one he worked at, were under reporting the number of SARS cases they had.

After the news of cover up came out, the government broke a pattern of never admitting mistakes and publically apologized for failing to inform the public about the disease earlier. Officials that were involved in the cover up — including the health minister and the mayor of Beijing — were sacked.

Later Jiang and his wife were detained and placed under house arrest. Jiang was forced to undergo brainwashing study sessions and wrote a daily “thought report” after asking the government to reappraise the Tiananmen Square pro-democracy protests.

Beijing was perhaps hit harder by SARS than any other place. There were 2,531 cases and 191 deaths. The disease all but shut down Beijing. At its peak, the streets and many buses and trains were empty. People stocked up on disinfectant. Marriages were postponed. The May Day parade in Tiananmen Square was canceled. Schools closed for 1.7 million children, many of whom where not allowed to go outside by their parents.

Hospitals and dormitories where the disease had appeared were quarantined and strict rules were implemented to make sure no one left. “Building bosses,” “door watchers,” and other informers were told to report cases of people who looked sick. Roadblocks and checkpoints were set up on roads leading out of Beijing. One family told the Washington Post they were stop 20 times on a 600 miles trip from Beijing to Nanjing and then assaulted by men in maska and white smocks, who quarantined the house where they were staying.

Not everyone complained. One American art dealer told the New York Times, “Beijing was wonderful during SARS. Romantic, beautiful. The sky was clear, for once. Everything shut down. There was no smog, or dust or traffic jams. No tourists. No cars.”

The most cases outside Beijing were found in Guangdong (the southern province where Guangzhou is found) and the northern province of Shanxi. In the Guangzhou area, animal markets were closed down. In Shenzhen a man was diagnosed of having SARS after he attended a wedding with 940 guests. All 940 guests, including all 508 inhabitants of a village, plus all the employees who worked at the wedding, were tracked down and quarantined.

In April riots broke out in the town of Chagugang near the northern coastal city of Tianjin over rumors that a local school would be turned into a ward for SARS patients from Tianjin. Cars were overturned, construction equipment was smashed and a hospital was raided. Tianjin had seven death and 149 cases of the disease.

Once the government decided to do something about SARS they pulled out all the stops. Roadblocks were set outside infected areas. Men in white smocks, masks and goggles fanned out across the nation with disinfectant spray. People with even the slightest hint of a possibly of carrying the disease were quarantined to their homes. Fines for spitting were raised and enforced. Harsh punishments were set for anyone who broke the SARS restrictions

In the early stages of the SARS outbreak people stocked up on disinfectants and avoided public transportation. As the crisis worsened streets emptied, restaurants were closed and entire neighborhoods and factories were quarantined. An effort was made to prevent millions of migrant workers from returning to their hometowns. Employers of migrant workers were told not to fire them even with business slacking off and offered tax breaks and other financial aid.

Schools, libraries and other public buildings were closed. Additions were quickly added on to hospitals to accommodate extra sick people. In the rural areas, villagers set up barricades to keep out people suspected of having the disease. The Chinese government threatened to execute anyone who caused death or injury by deliberately spreading SARS and suggested it might apply this policy to SARS patients who violated quarantine orders.

Studies later showed that government overreacted in some cases and quarantined too many people. Other measures — including the suspension of foreign adoptions and marriages between foreigners and Chinese — had dubious effectiveness. Chinese were allowed to marry other Chinese.

SARS is Contained and Then Returns in China 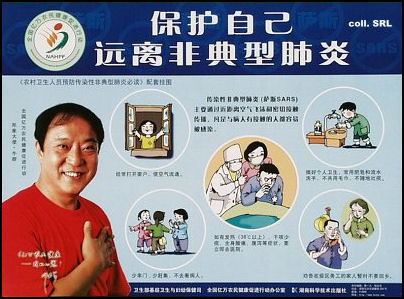 In July, 2003, the WHO declared that SARS had been contained around the world after no new cases had ben reported for three weeks. The disease disappeared almost mysteriously as it arrived. The most effective means of controlling it seems to have been the quarantines and isolation.

In December 2003 SARS returned. A 32-year-old man came down with it in the Guangzhou area The man lived in a house with some rats. The case was mild and he survived. Some believed there may have been a connection between the disease and the rats. There were four other cases. Of these, one had contact with civet cats — a waitress that worked at a restaurant where wild animals were served.

This time the government was better prepared and ready to take action. The patients were quickly quarantined. Travelers and health care workers were screened. Hotels required patrons to have their temperatures taken before they checked in. Travelers at train stations and bus terminals had their temperatures checked with ear thermometers.

In April 2004, two confirmed cases of SARS and four suspected cases were announced. The victims were believed to have contacted the disease through a lack of safeguards at the National Institute of Virology, a laboratory in Beijing where research on SARS was being done. Again, the government acted quickly. Five hundred people were quarantined. They were mostly people who had come into cotact with the victims.

One victim died — a woman who got SARS from her daughter, who in turn got from a nurse at the laboratory. A researcher at the laboratory passed SARS on to the nurse. She in turn infected her roommate and then her mother (the one who died), father and aunt when she visited her home town in Anhui. Most of people who were quarantined either came in contact with the nurse in Beijing or Anhui.

In early January 2004, as part of the anti-SARS campaign, the government ordered the slaughter of all palm civets, hog badgers and racoon dogs in the Guangzhou area. Thousands were killed but many escaped because the were hidden by owners and animal traders. Chinese health officials in goggles, white smock and masks raided markets and breeding farms and seized animals that were killed by electrocution, boiled to death or drowned in disinfectant and then incinerated. A campaign to get rid of rats was also launched.

About 10,000 animals were killed, In addition to the cull, roadblocks were set up to make sure no one was smuggling animals out of the region. People who worked in the animal markets where civets were sold had their blood tested, sometimes several times. Those who hid animals were threatened with fines of up to $12,000.

The measure came eight months after palm civets, hog badgers and racoon dogs at a Guangzhou market had been found carrying a virus almost identical to SARS. Instead of acting quickly them, suspicions were raised about the quality of the data. Not long after the civet cull the ban on selling civets was lifted and markets were again filled with the animals. Many scientists believe the killing of all these animals may do more harm than good. Little is known about SARS and its transmission and studying these animals may provide some insights into the disease. There was little evidence that killing animals provided much help.

The SARS outbreak brought attention to the consumption in civet cat in Guangzhou Even after the SARS outbreak business was good at the First Village of Wild Food restaurant in Guangzhou. One customer who was eating civet cat told the New York Times, it tastes “very good, very good.” When asked if was worried about SARS he said, “It’s no big deal.”