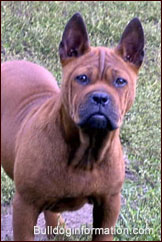 rare comchong qing dog Traditionally animals of all kinds have been looked upon more as sources of food than pets. Having an animal for the simple pleasure of owning and loving it was a luxury that only the richest people could afford. Rats have traditionally done well in China because their natural predators---cats and snakes---are considered delicacies.

Pet owners in China spend an estimated US$2 billion a year on their animals, said Per Lyngemark, founder of Shanghai-based Petizens.com, a Facebook-like site dedicated to pets. Growth in China’s pet products industry is outpacing that in the rest of the world, he said.”In America, it’s going up one percent a year. In China, it’s going up 10 percent to 20 percent a year. It’s really booming here,” Lyngemark said. [Source: AFP, February 2, 2011]

In the imperial era animals were largely looked upon as either pests, protection against pests or food. In the Mao era, pets were looked upon as decadent, bourgeois and imperialistic. A dog breeder told the South China Morning Post, “China was very poor and pets were not allowed. During the Cultural Revolution there wasn’t enough food for people, let alone dogs.”

It recent years it has become more common for people to own pets, especially in the cities where a surprisingly number of people live alone and find it comforting to have a pet at home. Going hand and hand with this trend is the high number of pets on the streets that have been abandoned by owners.

The number of stray cats and dogs in Beijing has increased dramatically in recent years. Many are thought to have belonged to pet-owners who tired quickly of the novelty of having a pet and let the animals go or they belong to people who moved to apartments in which pets were not allowed. Around some apartment complex the number of stray cats has jumped form near zero to 70 within a couple years.

Monkeys are kept as pets and used for entertainment in China. Theroux saw a man riding a bicycle in Sichuan with a rhesus monkey on his shoulders. In India and China otters are taught to catch fish for their human owners.

Cats are more easily tolerated than dogs by authorities because they consume less food than dogs, but like dogs they are sometimes consumed as food as they are in Korea and Vietnam.

Among middle class Chinese cats are increasingly being sought after as pets because they are easy to take care of and are less regulated less than dogs. In Beijing one can see people looking enchantedly and longingly at kittens in the windows of pet shops that specialize in cats.

Confucius kept a cat. There is a man in his 70s, Ding Shiying, who shares his 160-square meter home in Beijing with 160 cats, most of them strays. He took in his first cat in 1982 when he retired from his job in a medical office in a university and needed a “roommate.” In 2005, he told a Japanese newspaper, “I don’t feel lonely now that I have so many kitties.”

Unlike dogs, cats are not licensed and no one knows how many of them there are. By one estimate there are 500,000 to 600,000 cats in Beijing. Cats often hang out in alleys around garbage cans and are regarded as pests.

Birds and Bird Singing in China


Song bird market Song birds are kept in bamboo cages. It is very common to see Chinese with cloth-covered cages in parks taking their birds for "walks." Travel writer Paul Money once remarked that "China is probably the only place where people walk their birds and eat their dogs." Younger birds are trained by carefully placing them near older birds.

The Chinese enjoy bird singing competitions. Some of them pay large sums of money for rare birds and keep them in tiny ornate cages. The best birds cost as much as $2,000 and are kept in teak cages. Among the singing birds found in city bird markets are rose finches, plovers, Oriental magpie robins and Mongolian larks.

Keeping song birds has long been a favorite hobby of the rich and powerful in China. Hans Christian Anderson’s fairy tale The Nightingale is about an Emperor obsessed with the song of a nightingale. Keeping song birds was frowned upon in teh Mao era and viewed as crime in the Cultural Revolution.

Bird singing contests are often held on Sunday mornings, with the winners being the birds that can sing the highest number of different songs in 15 minutes. The country of Suriname is said to have the best singing birds. The bird are usually Twa-twas or Picolets and the record is 189 different songs by a bird named Flinto owned by Jong Kiem. Kiem told Reuter" "The best birds do what you want them to do...Sometimes the bird doesn't want to sing so you have to check where the problem is. You have to be very patient."

The Chinese are thought to be the first gold fish breeders, producing the first goldfish from carp about A.D 960. The Chinese had traditionally liked to keep fish as pets. Fish play an important role in feng shui design. In Sung Dynasty (A.D. 960-1279) goldfish were common household pets. In the 16th century the selective breeding of goldfish was a common hobby. In the 18th and 19th centuries King Louis XV of France and the Russian Prince Potemkin took an interest in the hobby. [Source: Paul Zahl, National Geographic, April 1973]

Goldfish belong to the carp family and were first found in rivers and lakes. Its golden color is the result of a natural gene mutation. The species was domesticated more than a 1,000 years ago in China and then introduced to other countries.Like pandas, goldfish have played an essential role in China's diplomacy. In 1954, 100 pairs of goldfish were given as a birthday present by China to India's first prime minister, Jawaharlal Nehru.

There were more than 300 goldfish varieties in their heyday. By the time the Communist Party came to power only about 60 were left. During the Cultural Revolution (1966-1976), many royal goldfish were destroyed, including a plaque to "Goldfish Xu" written by Emperor Qianlong.The Chinese goldfish industry never recovered from that," one goldfish breeder told the China Daily

A gold fish can theoretically grow to any size and no goldfish contains pigments other than orange, yellow and black. The other colors are blends of these pigments. Its growth is usually linked by food supply and tank or pond size. And like dogs, no matter how different goldfish look from one another they are all the same species Carassius auratus, a member of the carp of family. [Source: Zahl]

The traditional Chinese interest in dragons---though to originate from the sea---and mythical monsters carries over to fish, whose deformities were segregated and bred. The most bizarre goldfish are called "fancies." These include bubble eyes, which have two fluid-filled marble-size eye sacs; skyward eyes, which have similar eyes except the eyes point upward rather than forward; and the lionhead with puffy nodules that look beautiful to some but grotesque to others. There are also tiger heads, goggle eyes and red-and-white dragon eyes. There are even ones with sea urchin-like eyebrows, who look like a red and white version of the Creature from the Black Lagoon. [Source: Zahl]

Lionhead goldfish are specially breed with massive grotesque orange tumors on their white heads. The growths sometimes cover almost the entire head and gills of the fish. Often the bigger and more grotesque the growth the more valuable the fish. Sometimes a single fish sells for over a US$1000. Moors, usually blue-black in color, tend to turn a reddish color at some point in their lives. An American fish by the name of Old Black Joe reportedly turned red, white and blue during World War I. The value of the fish jumped to $5000 and it was used to promote savings bonds. [Source: Zahl]

"Goldfish breeding is the riskiest business in the world," says one breeder. "Anything can happen to them and it usually does." In Hong Kong gold fish hatcheries are guarded by fierce attack dogs. The fish live in pools where the fish are graded by color, scale, brilliance, fin perfection, profile and energy. [Source: Zahl]

Xu Jianmin is the 10th generation descendant of the family, known as "Goldfish Xu", that raised goldfish in the Forbidden City for emperors of the Qing Dynasty (1644-1911) for more than 200 years. For him raising goldfish is not just about the love of a species. It is more about restoring the quintessence of Chinese culture. "I feel responsible for carrying forward a unique skill handed down by my ancestors," Xu told the China Daily. [Source: Xu Lin, China Daily, December 28, 2010]

"Compared with ordinary goldfish, the royal ones are bigger breeds with brighter colors and longer lives," Xu told the China Daily. "Royal goldfish were not allowed outside the palace. Those found were killed," he said. It wasn’t until 1934 that the mysterious royal goldfish were first unveiled to the public, at an exhibition in Zhongshan Park. [Ibid]

The secret to the beauty of the royal variety, Xu told the China Daily lies in four elements - purity of the breed, water, fish food and light. It is important to know when to change the water, how many times a day to feed the fish and how much light to allow the fish in different seasons, he explains. "There are a thousand combinations of the four elements for different growth stages. Only an experienced breeder can master them," he says. [Ibid]

Royal goldfish used to be raised in big cypress-wood basins and earthen pots, which were durable, breathed well and were able to withstand temperature changes. "But making them was expensive, cumbersome and labor-intensive and wasn't handed down," Xu said. Xu says such containers are crucial for royal goldfish, but he can only make imitations based on a vague childhood memory and sometimes has to use cement tanks instead. [Ibid]

In many Chinese fisheries, goldfish are raised in large pools for mass production, which results in poorer quality, in terms of shape, color and life expectancy. "Goldfish with short life spans now dominate the market. That's why people feel domesticated goldfish die easily and are unwilling to raise them," the breeder Xu Jianmin told the China Daily. "Goldfish from Japan and Taiwan account for more than 80 per cent of the international market. However, mainland goldfish are known for their lower price and quantity, thanks to an unregulated market," he says. [Source: Xu Lin, China Daily, December 28, 2010]

Xu was initially not interested in goldfish breeding but after his father died he became aware of how the art of goldfish breeding was being lost. He quit his job and opened his fishery in 2004, using his savings of 300,000 yuan (US$45,000). Of his more than 200,000 goldfish, less than 1,000 are top-level ones, whose prices are up to 10,000 yuan. "Many buyers are wealthy, but I will not sell to those with no experience raising goldfish," he says.

Xu told the China Daily he can barely make ends meet, as this is an industry for big investment and slow profit.Another challenge has been to find a fixed place for the fishery - he has already moved three times in six years. Xu currently has two apprentices besides his daughter, who wants to follow in her father's footsteps after graduation.

There is a strong demand for high-quality goldfish from Japan, South Korea, and Southeast Asian countries, as the goldfish is a symbol of wealth and good luck in their cultures too.