China was eighth in total medals and seventh in gold medals at the 2010 Winter Olympics in Vancouver with 5 gold medals, 2 silver medals, 4 bronze medals and a total of 11 medals.

China had a hockey team at the Winter Olympics in Nagano. The nickname of the goalie, Guo Hong, was the Great Wall.

In recent years the Chinese have made their presence known in ariel skiing a sport that involves leaping into the air from a ramp and performing twists and turns and landing on a slope. It incorporates many of the same skills as diving and gymnastics.

Ariel skier Xu Nannan won a silver medal at the Winter Olympics in Nagano in 1998. She was trained as a gymnast at the Shenynag Institute of Physical Education. Li Nina was a favorite to won a gold medal in Turin in 2006. In the 2004-2005 season she had six firsts and four seconds in 11 World Cup events. China’s Wang Jiao and Zhao Shanshan placed first and second in the woman’s World Cup aerials in December 2005.

Li Nin won the women’s aerial skiing event at the world championships in 2007 and 2009. Compatriot Xu Mengtao came in second in 2009.

China didn’t win any gold medals in Vancouver in aerial skiing, an event it has done well at previous Olympics and world championships. However Li Nina and Gui Xinxin took the silver and bronze respectively in the women aerial.

In 1995, 18-year-old Chen Lu won the World Championship in figure skating. She charmed the audience and judges with a long program skated to the music from the film The Last Emperor. It was the first figure skating gold ever for China. Chen won the 1994 Olympic bronze medal.

Xue Shen and Hongbo Zhao won the bronze medal in pair's figure skating at the 2002 Winter Olympics in Salt Lake City. Chinese skater Guo Zhengxin landed two quadruple jumps in the 1998 Winter Olympics but came away without a medal.

Zhang Dan and Zhang Hao won the silver medal in the pairs figure skating at the 2006 Winter Olympics in Turin. They achieved this after Zhang crashed to the ice in the short program with her legs split in brutal fall that drew gasps from the crows. Doubled over in pain, she and her partner went to the sideboards and talked briefly with their coaches. After receiving permission from the referee they picked up their routine where they left off. The crowed roared at their display of courage. They nailed everything in the remainder of the short program and in the long program. The pair is unrelated.

Zhang fell while trying the pair’s most difficult move, an unprecedented throw quad salchow, at the beginning of their routine. Zhang Dan said afterwards, “We didn’t say any words of giving up. We said we could go on. I think its a very valuable experience for competition. It’s so important for myself because I made a mistake on the first element, but I think I can do all the other elements, so why not keep going?”

China’s pair Zhang Dan and Zhang Hao skated well in the 2007-2008 season. They danced to B. Yao’s Piano Fantasy.

Shen Xue and Zhao Hingdo are two-time world champions in pairs figure skating, They were married and then retired after the second world title in Tokyo in 2007. They won the bronze at the Turin Olympics in 2006. They made a come back in 2009 when Zhao was 36 and Shen was 31, skating in Grand Prix events.

American skater Michelle Kwan is of Chinese descent. She was invited to a White House state luncheon for Chinese President Hu Jintao when he visited Washington. She has visited Beijing, Hong Kong and Guangzhou as the first American Public Diplomacy Envoy, speaking to students about her personal experiences.

Chinese Figure Skating at the Vancouver Winter Olympics in 2010

China won the gold and silver medals in pairs figure skating at the 2010 Winter Olympics in Vancouver. Shen Xue and Zhao Hongbo won the gold medal and Pang Qing and Tong Jian won the silver medal. In the long program Shen tumbled onto Zhao’s back during a normally routine lift but skated well enough to beat their compatriots by three points. When the routine was over Zhao knelt on the ice and buried his face in his hands while his wife Shen patted him on the back. The gold was the first for China in figure skating. It was also the first time since 1960 that a Russian or Soviet couple was not at the top of the podium.

Shen Xue and Zhao Hongbo had been pursuing an Olympic medal for more than a decade. They won bronze at the previous two Olympics and came out of a comfortable retirement in 2007 to pursue their dream one last time. Zhao was 36 and Shen was 31 at Vancouver, ages regarded as way over the hill in sport in which teenagers often reign. After their victory Zhao said, “So many years have been devoted to this dream.”

On Shen and Zhao’s long program an AP reporter wrote, “They skated with the passion that has become their new trademark, the choreography to “Adagio in G Minor” perfectly in tune to their music. She was so expressive, the audience could practically feel her every emotion....Their throws were huge and flawless, the kind of trick that would dazzle even the X-Games generation. Their throw triple salchow was so massive, she ought to get frequent flier points.”

Pang Qing and Tong Jian won gold medal in pairs skating at the world championship a month later in the event in Turin.

In February 2011, question were raised about another age discrepancy among Olympics athletes---this time in figure skating not gymnastics. “According to a list of birth dates published on the Chinese Skating Association's website and found by The Associated Press, the skaters violated the sport's age limits by competing when they were either too young or too old. The birthdates on the federation's websites differ from those listed on the athletes' International Skating Union bios.” [Source: AP, February 15, 2011]

“Among the skaters whose eligibility is in question are Zhang Dan and Zhang Hao---who won the silver medal at the 2006 Turin Olympics Games and silvers at the 2006, 2008 and 2009 world championships---and Sui Wenjing and Han Cong, the reigning junior world champions and China's top up-and-coming pairs team,” AP reported. “According to the records found by the AP on the federation website, Zhang Dan was born Oct. 4, 1987, meaning she would have been only 14 when she and Zhang Hao---no relation---competed at the 2002 Olympics and world championships. The Zhangs were 11th in Salt Lake City and ninth at worlds. Zhang Hao, meanwhile, was born on Feb. 6, 1982, according to his birthdate on the federation website. That would have made him too old to compete at the 2003 junior world championships, which they won. [Ibid]

According to ISU rules, skaters must be 15 by the preceding July 1 to compete at an Olympics or senior world championships, and 14 for other senior-level international competitions, such as the Grand Prix final. Junior skaters must be at least 13 the previous July 1 but cannot have turned 19 (singles) or 21 (pairs and ice dancers). [Ibid]

Chinese figure skating officials blamed poor record keep for the discrepancies and said the birthdates the Zhangs provided when they entered competitions were real. A statement issued on the Chinese Skating Association website said “We have reach the conclusion through investigation that [discrepancies] happened die to mistakes made during information handling in, collecting and verifying process.” 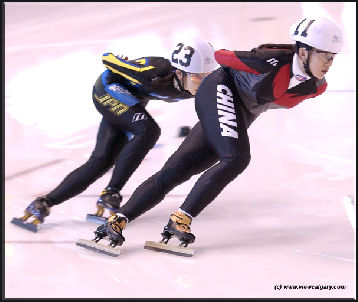 Yang Yang was first Chinese to win an Winter Olympic gold medal. She won the previous five world titles but failed to win an individual medal at Nagano in 1998 even though she was the favorite. She won a silver in the relay but was disqualified in the 500 meter and 1,000 meter races. After winning in 2002, she said, “For me my dream has come true and for my country it is the first gold medal for the Winter Olympics.”

Chinese Speed Skating at the Vancouver Winter Olympics in 2010

China dominated women’s short track speed skating, winning all four gold medals, much to the chagrin of South Korea, which was expected to do well in the sport. Wang Meng won three gold medals: in the women’s 500 and 100 meter events and as a member of the gold-medal winning 3,000 meter relay team along with Sun Linlin and Zhou Yang. Wang the gold medalist in the 500 meters four years earlier at the Olympics in Turin. She is the world record holder in the event and jumped off to a lead and stayed there in all of her races

The competition between China and South Korea was very fierce. Before the games an South Korean coach threw bottles of water at a Chinese team official was filming a South Korean women’s training session from the stands.

Eighteen-year-old Zhou Yang won a gold medal in the women’s 1,500-meter short track speed skating event, finishing well ahead of the three South Koreans that made it to the final, with two of them, taking silver and bronze. Zhou is the world record holder in the event. She also won gold as a member of the 3,000 meter relay team. After the Olympics she was scolded by China’s deputy sports minister for thanking her parents but not thanking her country, for winning gold. The minister said, “It is OK to thank your parents. But mostly you should thank the motherland. You should put the motherland first, not only thank your parents.” Chou’s parents, who were unemployed at the time of the Olympics , were given a 94-square-meter apartment worth 300,000 yuan in their home city of Changchun.

In August 2011, gold-medal-winning speed-skater Wang Meng was expelled from the national team for a drunken brawl in which she punched team manager after missing her curfew after a night out during training camp in June. AP reported: “China's most decorated Winter Olympic athlete...Wang Meng went out drinking and failed to return to the team hotel before a curfew, China's sports governing body said on Thursday night. When she was confronted by the team manager, she assaulted her, it said.” [Source: Associated Press, The Guardian August 5, 2011]

The 26-year-old athlete was expelled from the national team and banned from international competitions because her conduct "has violated the team's disciplines and jeopardised the sport's image," China's General Administration of Sport said. Wang, who won three golds at the Vancouver Games in 2010, and one gold, a silver and a bronze at Turin, Italy, in 2006, had been suspended since the incident during a summer training camp in the eastern Chinese city of Qingdao on 24 July.

The state-run Xinhua news agency said Wang punched team manager Wang Chunlu after being criticised for failing to meet a curfew after a night out with five other team-mates. The General Administration of Sport said Wang and male speed skater Liu Xianwei assaulted the team manager and damaged hotel property. Liu was also expelled for his role in the incident. The other four squad members---Zhou Yang, Liu Qiuhong, Han Jialiang and Liang Wenhao---were allowed to keep training with the national team.

At the time, Xinhua reported Wang had accidentally cut her hands on glass and needed dozens of stitches. In a video posted on the website of China News Service, an angry Wang, her arms in bandages, was shown amid a throng of reporters at the Winter Sports Management Centre.

Xinhua said Wang is famous for her fiery temper and it is not the first time she has landed herself in trouble. She was expelled from the national team for six months in 2007 after criticising her coach's tactics at the Asian Winter Games, Xinhua said. In June, Wang and her team-mates reportedly clashed with security guards who accused them of making too much noise during a night out in the south-western Chinese city of Lijiang. That incident led to the 10 pm curfew being imposed during last month's summer training camp

Later the coach of China’s speed skating team, Wang Chulu, was sacked over the brawl. The General Administration of Sport said Wang, a former Olympic bronze medalist, was responsible for the problems.