Gold medalist in dual air
rifle in 2004Chinese athletes are expected to bring glory to China not to the athletes. Their entire training is paid for by the state. They are employees of the state who are paid very little and expected to follow a number or rules such as ones that prevent athletes from getting married until they are 28 for men and 26 for women. Athletes that fail to reach the highest level are often dismissed. There is a belief that athletes have to win top honors to pay the state back for all it has invested in them.

Chinese athletes are regarded as having a strong work ethic, dutifully following the instructions of their coaches and not being independent-minded like many Western athletes. But at the same time it has been argued their confidence level is not as high as their Western counterparts. Some say this is the result of coaches who are more likely to criticize than praise.

Chinese athletes spend most of their time training and don’t engage in that many competitions. One Chinese gymnast who visited the United States was surprised that the gymnast there had competitions nearly every week and they developed through competitions.

Chinese athletes are not necessarily the sports automatons they are made out to be. The diver Fu Mingxia went to college to study economics after winning three gold medals and returned to the sport to win a forth. Basketball players have been discovered on the playground rather than groomed in a sports school have made it to the NBA. The Olympics gymnast Li Ning founded a billion-dollar sportswear company

Sports writer Mary Niccole Nazzaro told the International Herald Tribune, “Chinese athletes tend to be very well behaved. Their lives are basically choreographed — no opportunity to stray from the goal of winning championships. Case in point — at the 2006 U.S. Open the Chinese tennis players, who make very good money on the tour, were being chaperoned by their coaches and handlers pretty much 24/7.”

In the 1980s athletes lives were controlled down to the last detail. Prize money had to be turned over to the state. When top table tennis players faced each other in national competitions they were told who would win and who would lose. Players that towed the party line and upheld Marxist values were rewarded. Those that didn’t were punished.

Chinese women often fare better than the men. Of the 407 athletes who competed at Athens in 2004, 269 were women and only 138 were men. In 1996, approximately 200 of the 310 athletes on the Chinese Summer Olympic team were women. These numbers are especially significant when you consider there are more Olympic events for men and overall about twice as many men as women compete in the Olympics.

"China's women have risen farther and faster than any team of either gender in the history the Games," gushed Newsweek in 1996. Chinese women athletes perform so well that Sinologist James Riordan said many Chinese were struck by the "the rise of the yin" (passive female spirit) and "the withering of the yang" (aggressive male spirit).

Some credit the success of Chinese women athletes with support given to women by the Communist regime. Mao used to say "women hold up half the sky" and women have received equal funding in many sports since 1950s. Others point to a long tradition of women in sport and athletics in China. Since ancient times. women heros have been a major figures in martial arts literature. Today they have starring roles in kung fu films. In her book “Training the Body of China”, anthropologist Susan Browell contends that the success of Chinese women can be attributed to the forced work ethic of women and their wiliness to "eat bitterness."

Many more see the embrace of women’s sports as an opportunity to win medals. Ren Hai, a director at the Center for Olympic Studies in Beijing, told Newsweek, " Women's programs are less developed in other countries. From a strategic view women are our best hope for winning medals.”

Many Chinese still have an inferiority complex about their athletic abilities. The People’s Daily has suggested that Chinese have “congenital shortcomings” and “genetic differences” that prevent them from defeating black and white athletes. Feng Shuyoang, the head coach of China’s track team, said, “Chinese people are not so good as Europeans and Americans.” In China you cannot easily find the youngsters with the right body shape. Yet if you go to Europe or America they are everywhere.”

The Chinese emphasis on heavy training in part is seen as an effort to overcome Chinese perceptions of their physical inferiority. A principal at a sports school in Qingdao told Time, “Chinese bodies are not as naturally strong as those of people for other countries. But we can work harder than anyone else. That’s our biggest advantage.” Chinese women in particular are known for working hard and “eating bitter” in their training. In Athens 60 percent of China’s medals were won in women’s sports.

Chinese coaches have a reputation for being stern, unforgiving taskmasters,, with some of their methods bordering on being abusive, bullying and humiliating. Cu Yude, a sports psychologist at Beijing Sports University told the Los Angeles Times, “The coaches can be very dictatorial, issuing orders to athletes without explaining why...Some also get angry with us and say we’re meddling. That athletes should just follow their orders.”

Zhang Guozheng, a Olympic gold-medal-winning weightlifter in Athens, told the Los Angeles Times, “My training was very bitter. I always missed my family. But my coach brought me up and we were closer than he was with his own children.”

The Los Angeles Times described Chinese coaches as being like mothers who chide their children for getting “only” 99 percent on a math test.

Coaches are being encouraged to praise athletes and listen more in what they say. 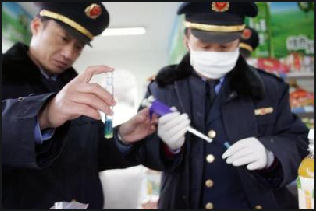 James Rioradan, a Chinese sports expert at the University of Surrey, told the New Yorker, after reentering the Olympics in 1984, the Chinese "found that the West had an unfair advantage because they were using all sorts of stimulants. From the Games in Los Angeles onward, the Chinese were quick to realize that if you want to win at the Olympics you have to use drugs.”

After the collapse of the Eastern Communist bloc, Eastern European coaches and drug specialists were reportedly recruited by the Chinese. Coaches and athletes who suspect the Chinese of using performance-enhancing drugs such steroids allege they use techniques pioneered by the East Germans in which athletes take the drugs while training and stop with enough time before their competition so that their blood and urine are clean when they are checked on race day. Spot checks are designed to foil this kind of systematic doping.

Some of the sports that China has been doing well in lately’swimming, track and field, rowing and weightlifting — are strength sports in which steroids give athletes an edge. One female weightlifter told the Los Angeles Times that her coach fed her medicinal tonics that produced a deep voice, facial hair and masculine features. China is said to be the source of many of the steroids available over the Internet.

The drug situation is also complicated by the fact that many athletes are fed special potions and elixirs containing things like seal penis, caterpillar fungus and deer horn whose exact chemical content and "active ingredients" are unknown. There have also been reports that athletes have been sequestered on purpose to avoid drug testers.

In February 2011, the World Anti-Doping Agency began an investigation into the use of steroids in the raising of cattle after several athletes blamed their positive doping tests on steroid-tainted beef. Olympics judo gold medalist Tong Wen was banned for two years for testing positive to the steroid celbuterol which she blamed on tainted meat. The ban was ultimately overturned due to a “procedural error” in the lab tests.

Getting Serious About Drug Testing in China

China set up its first Doping Control Center in 1990 and established its first anti-doping laws in 1995,, In 2004 these were revised and strengthened so there were in line with international standards.

After the 1994 swimming and drugs scandal, Chinese athletes were categorized as drug cheats although this reputation was often undeserved. Nils Lindstedt, a Swedish employee of a drug testing firm that did spot checks on athletes all over China, told Newsweek, "Everyone talks about Chinese sportsmen as if they were drug-taking machines. It simply isn't true." He said Chinese athletes were no more likely to test positive for drugs than athletes of any other country.

After the doping scandal in 1994, China also began getting more serious about getting drugs out of sports. In 1994, around 1,400 drug tests were conducted. A total of 35 Chinese athletes tested positive for banned performance enhancing drugs, mostly steroids. In the months after the drug scandal nearly 2,100 out-of-competition tests were conducted, with only 17 positive results. In 1996, there were no positive drug tests.

Drug testers doing out-of-competition tests travel far and wide across China. Describing the testing of a star athlete who lived in a mud hut on the edge of the Gobi desert in Inner Mongolia, Lindstedt said, "When they found out I wanted some of their daughter's urine they really began to wonder what the West is all about."

In 2000, 2004 and 2008 not a single Chinese athlete failed a drug test. Just before the 2000 Summer Olympics in Sydney, 27 athletes (10 percent of China's Olympic team) was kicked off the team for suspected drug usage based on suspicious blood tests. They included seven rowers, four swimmers, 14 track and field athletes, including six woman’s distance runners, one sprint canoeists and one slalom canoeist. Thirteen coaches were also kicked off the team.

Crack Down on Drugs Before the 2008 Olympics in China

A raid on a sports school — the Anshan Athletics School on Liaoning Province — in 2006 revealed staff member injected illegal drugs into teenagers with hypodermic needles. Drugs, including testosterone and erythoprotien, were found in room of the headmaster. Staff members at the school face criminal charges under the new anti-doping code Investigators found 19 children aged 15 to 18 that received injections of performance-enhancing drugs. In 2002, another Liaoning school got busted for performance enhancing drugs.

The Anshan scandal was revealed by an anonymous caller to China’s Anti-Doping hotline. The scandal was an embarrassment for Anshan, a major track and field center, and the entire province. People in the town have been warned by officials not to talk to outsiders. People involved in the scandal have disappeared.

In September 2007. Wang Hongshi, a gold medalist in the woman’s triathlon at the 2006 Asian Games, was banned for two years for doping and will miss the 2008 Olympics. She is only the second Chinese athlete tp be punished for drugs since the 2004 Games in Athens. The other was long-distance women’s runner Sun Yingjie, who tested positive in 2005.

In October 2007, China said it will crack down on producers and sellers of performance-enhancing drugs. The campaign will be carried out by top law enforcement units in conjunction with several government agencies. It will involve checking drug factories, scrutinizing drug imports and exports, and requiring producers of performance drugs to have special licences.

At the Beijing Olympics in 2008, 4,500 drug tests (using urine and blood samples), up from 3,700 in Athens, were carried out by 150 scientists and volunteers. The samples were analyzed in a new $10 million, heavily-guarded, state-of-the-art laboratory and brought to the lab in vehicles accompanied by armed guards.

Chinese wrestler Luo Ming and swimmer Quyang Kumoeng tested positive for banned substances in the weeks before the Games in 2008 and they and their coaches were barred for life from their sports.