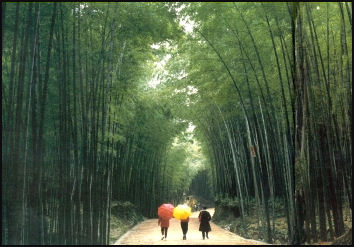 There are over 31,142 species of plant in China, an eighth of the world's total and third largest total in the world after Brazil and Indonesia. All of them are described in the 126-volume Flora of China.

The ginkgo, a tree associated with China, is regarded as world's oldest living tree species. It first appeared 160 million years ago. One kind of giant ginkgo tree, the dawn redwood, which is found in 100 million-year-old fossils and thought to have been extinct for 65 million years was found growing near a mountain village in 1946 in forest in Sichuan province.

Kudzu, a vine that has taken over the south, was introduced from China in the 1920. See Japan.

Hachiijo Island is the home of mushrooms that glow in the dark.

Grass imported from the United States is spreading at a rapid pace.

Bamboo is a kind of grass that can grow to size of a tree. The stems are hollow, polished and jointed and sometimes reach three feet across. Some flower and seed every year; others only do so once every 60 years or so. Some species of bamboo die off en masse after a single flowering. One such die off killed hundred of giant pandas in China in the 1980s. Depending on the species, the die off can occur everywhere from once every dozen years or so to once every century.

In the short term bamboo reproduce by sending up new stems rather than by producing seeds. A single root may produce as many as 100 stems. These stems break the soil with their nodes already formed and can grow as much as a meter in a single day. Bamboo doesn't have rings like a tree. The hollow nodes are already developed when it emerges in the spring and grows like an uncoiling party favor.

There are 300 species of bamboo in China and more than a 1,000 species worldwide. Some bamboos such as Bambusa Arundinacea of India and Phyllostacys of China reach heights of 100 feet. Moso bamboo, used to make fabrics, can reach a mature height of 75 feet in two months. Hikers who run out of water in the Malaysian rain forest can get a bout a canteen's worth by boring a hole right above the joint of large stalks of bamboo.

Some of China¡̅s earliest records were written on bamboo in the second century B.C. and hundreds of characters in the Chinese language sprang out of pictures of bamboo. Bamboo often appears as a symbol in Chinese art.

According to one Chinese scholar, "Philosophers say the smooth expanse between nodes represents virtue, a long distance between faults, and the hollow interior bespeaks modesty and humility."

Uses of Bamboo in China

China is the world’s largest bamboo producer. The province of Guangdong produces about 40,000 tons of bamboo a year. Some of it is exported to Europe for tomato stakes, to Scandinavia for ski poles, and to the United States for fishing poles. Bamboo cuttings used to make these items take only six to eight weeks to mature. Bamboo is also used in making pipes, bongs, vases, and tools. In China bamboo is used in panda food, shoulder poles. and flooring.

The Chinese use bamboo as a construction material: the frames for village huts and scaffolding for high-rise buildings are made of bamboo. Centuries ago Chinese engineers developed the idea of twisting bamboo into cables used on suspension bridges. The great bridge over the River Min in Sichuan, which has stood for over a 1000 years, is supported by seven-inch-thick bamboo cables, which are wrapped around spools and tightened like guitar strings. [Source: Luis Marden, National Geographic, October 1980]

Bamboo shoots, sometimes called bamboo babies, are a favorite spring time food. You can often see people poking around in earth for bamboo before it surfaces, when its is tender and tasty. A day can make the difference between a tender one and a tough woody one. Bamboo shoots are usually boiled and stir fried.

In Chinese medicine, black bamboo is used to treat kidney ailments and prickly heat, while the juice squeezed from plant helps bring down fever.

Bamboo can made into a silky fabric that is highly absorbent and antibacterial, using a process similar to the one that turns wood pulp into rayon. Specialty shops and store chain sell bamboo-based clothing and linens. Green consumers like bamboo-based products because their source is renewable and products are made without many added chemicals. The amount of bamboo for textiles shipped by China increased 10-fold between 2004 and 2006.

Many common garden plants such as the regal lily, golden-throated white trumpets, white mist poppies, various forsythia bushes, clematis vines, rhododendrons, dogwoods and primroses originated from Hengduan Mountains, a biologically rich area between Yunnan, Sichuan and Tibet. Most of them were described in scientific literature for the first time by British plant hunter Ernest Henry Wilson, accompanied by a dozen men and 15 mules, who collected plants in the area on several expeditions in the 1900s and 1910s.

The plants form this area became fixtures of gardens in the West because they were beautiful, hardy and could survive the chill of the British and New England winter. Wilson's input is recognized by the number of species that bear his name.

Many of the rhododendrons that grace the world’s gardens originated in Tibet and were collected by George Forrest, a late Victorian plant enthusiast who dodged authorities in China to bring seeds for R. sinogrande for the potting sheds of J.C. Williams of Corwall.

Hundreds of species of alien plants have been introduced to China since the country started opening up in the 1990s. Of these 400 have been categorized as invasive, with some causing severe damage to the environment. These species have already caused more than $14.5 billion in economic damage according to an article by Chinese and American researchers in the journal Bioscience.

Among the most damaging are water hyacinth, alligator weed and water lettuce, which were introduced in the 1960s and 70s as cheap animal fodder. These plants grow very quickly and have escaped into rivers, lakes, ponds, and canals, outcompeting local plants, choking waterway, depriving water life of oxygen and light, and blocking water intake pipes. Thus “causing much damage to fisheries, irrigation and natural ecosystems in a many as 20 provinces. Other invaders include ornamental plants.

“Subtropical and warm-temperate forests represent the northern and eastern fringe of one of the world's great forest traditions. Starting on the southeastern slopes of the Himalayas, Asia's evergreen broad-leaves stretch in a wide belt clear across southern China to the Pacific seaboard. Along their southern edge they include stretches in northern Myanmar and Vietnam. On reaching the coast, the warm currents permit them to sweep northward to Japan and the very tip of the Korean Peninsula. [Source: Kevin Short, Daily Yomiuri, January 20, 2011]

?These forests should not be confused with true tropical rainforests, which throughout the region border them on the south. The component species and overall ecosystem of these forest types are substantially different. To the north, the evergreen broad-leaved forests give way to cool temperate deciduous broad-leaved woods, which in some places are dominated by beech and deciduous oak. Evergreen broad-leaved trees have thick leaves that are often covered on the upper surface with a thick coat of waxy substance that affords some protection from the cold. This coating gives the leaves a bright shiny aspect. [Ibid]