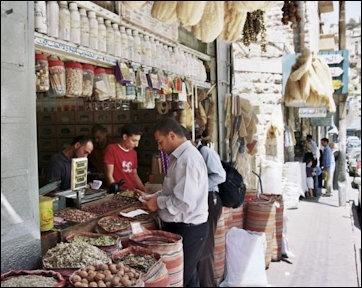 Muslim healers often find verses in the Qur’an to go along with their treatments. Describing a healer in Niger, Eigen Richards wrote in Natural History: "He writes out the verse on a wooden prayer board, using ink made from tree bark. The patient must was wash the words off with water in a bowl, then drink it. For chronic problems he writes verses on paper that is then sewn into a leather pouch that is worn around the neck, waist ankle or wrist."

One “ hadith” recommends that illnesses be treated by taking honey, cupping and cauterization. Cupping is the draining of blood from the hands, legs or head. Muhammad was once cupped while he was fasting. Cauterization is the use of a burning hot piece of iron to stop bleeding. In ancient times this practice was used among soldiers who lost an arm or leg in battle to keep them from bleeding to death.

In Egypt the most common potions are those are prescribed to take off weight and the greatest demand is during Ramadan—the Muslim month of day time fasting—when Muslim gorge themselves with sweets, stuffed peppers, puddings and lentil soup at night. One fat-reducing potion is a boiled tea made from a red powders taken twice a day. Another is a leafy cold drink consumed three times a day.

Health Problems in the Desert

If you are going to the desert make sure have eye protection (glasses or ski goggles), and something to cover you mouth and nose if necessary. It is not a bad idea to bring a surgical mask or painters mask. Desert winds can blow sand and grit into the eyes and mouth. 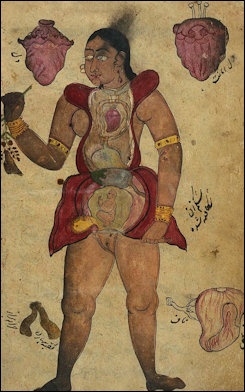 Getting some sand in one’s eyes can be a serious. Sometimes a layer of tissue will form over a congealed piece of sand. In addition to being extremely irritating it can cause permanent damage. Removing it can involve slitting the eye with a razor blade.

Dehydration is a serious problem in the hot desert. It is possible to die in less than four hours in wrong part of the desert at the wrong time. It goes without saying to bring lots of water, at least 5 liters per person a day, and have access to shade. To avoid heat exhaustion and heat stroke stay in shade as much as possible, get enough salt, replace electrolytes with fruit juices or prepared drinks that replace the salts you lose, stay out of the sun and don't do strenuous exercise after 10:00am and before 4:00pm.

Heat cramps are the least dangerous of the heat-related conditions. They serves as a warning that more serious things might happen. The symptoms include cramps, muscle twitching, and lightheadedness. If you have any of these symptoms immediately cool down your body with some water and shade.

Heat exhaustion is a serious condition. It is characterized by severe fatigue, headaches, confusion, nausea, weak pulse, cold clammy skin, and giddiness. Heat stroke is a very dangerous and potentially fatal condition characterized by a high body temperature and no sweating. People with heat stroke need immediate hospitalization; and should be cooled with wet towels until then.

Snakes and scorpions are mainly active at night. Bites from scorpions are often painful but rarely dangerous although some species can be dangerous. Snakes bites are generally a much more serious matter. Wearing thick boots is good preventative measure. Snakes and scorpions sometimes rest in shoes and clothes. It is a good idea to carefully shake your clothes and shoes before you put them on. There are antivenoms (antivenins) for most poisonous snakes but they are not always available. If you are really concerned you may want to bring snake anti-venom and scorpion anti-venom for the snakes and scorpions you might encounter. These sometimes need to refrigerated.

Unani (Greco–Arab medicine) is another ancient medical traditions that has its roots in ancient Greece and Rome and was developed under Muslims in the Middle East and was brought to the Indian subcontinent around the 10th century. Based on the principals of the Greek physician Galen and developed by the Arab philosopher Avicenna (A.D. 980-1037), it is based on the belief that food is transformed into natural warmth in the stomach with useful substances being distributed to parts of the body and waste eliminated.

According to Unani beliefs the main products of the food transformation process are the four humors: blood, mucus, yellow bile and black bile. These humors are combined with the four primary qualities: warmth, cold, moisture and dryness. If the four humors and four primary qualities are in balance a person is healthy. If there is disharmony among them then an ailment of some sort can occur. External factors such as climate, age, personal habits and professions can cause the dominance of one of the four humors. 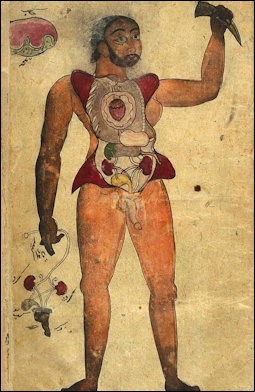 from the Medicine of Akbar

Early Muslim rulers built hospitals that were based on the unani system. The system was spread far and wide by the Moguls, who lionized eminent physicians. Under the British, unani and ayuvedic medicine were ridiculed and regarded as inferior to Western medicine. Unani and ayuvedic were neglected among the elite but continued to be practiced in the countryside. Both systems were given a boost when nationalist movements in South Asia were launched in the late 19th century.

A growing number of Muslims in Southeast Asia are turning away from Western medical care in favor of al-Tibb al-Nabawi, or Medicine of the Prophet, a loosely defined discipline based on the Quran and other Islamic texts and traditional herbal remedies. What is termed classical Islamic medicine developed in medieval times when it was regarded better than Western medicine in Christian Europe, and exerted a significant influence on it. Practitioners say many ingredients in today's treatments were used in Muhammad's time, including honey, olive oil, bee pollen, dates and black caraway seeds — which one ad claims is "a cure for every disease but death."

On the practice of 'Islamic Medicine' in Indonesia, Denis Gray of Associated Press wrote: “A 47-year-old housewife who recently started using Islamic medicine emerged tearfully from an exorcism, speaking of newfound tranquility after a turbulent period. Also, her abdominal pains are finally easing. Suratmi, who suffers from an ovarian cyst, has been taking a mix of herbal medicine harking back to the dawn of Islam, as well as undergoing exorcisms at a clinic in Jakarta. She is among a growing number of Muslims in Southeast Asia turning away from Western medical care in favor of al-Tibb al-Nabawi, or Medicine of the Prophet, a loosely defined discipline based on the Quran and other Islamic texts and traditional herbal remedies. "I heard that so many people have been healed, so I hope Allah can help me. I followed His path here," said Suratmi, who like many Indonesians goes by one name. [Source: Denis Gray, Associated Press, September 26 2011 ~/~]

“The Islamic medicine trend is often associated with fundamentalists who charge that Western, chemically laced prescriptions aim to poison Muslims or defile them with insulin and other medicines made from pigs. Members of terrorist groups have been involved in Islamic medicine as healers and sellers, while some clinics are used as recruiting grounds for Islamist causes. But the bulk of those seeking out Islamic clinics, hospitals and pharmacies, appear to be moderate Muslims, reflecting a rise in Islamic consciousness worldwide. "Islamic medicine carries a cachet that, by taking it, you are reinforcing your faith - and the profits go to Muslims," says Sidney Jones, an expert on Islam in Southeast Asia with the International Crisis Group. ~/~

“Islamic medicine, toiletries and beauty products have become a big business and industry's advertising can be just as gimmicky as any in the West. Capitalizing on the popularity of U.S. President Barack Obama, who spent four of his childhood years in Indonesia, one company produces a popular anti-stress concoction called Obahama - in a corruption of an Indonesian phrase for herbal medicine. Siwak-F, also exported to the Middle East, is hailed as "toothpaste just like the Prophet used to use." ~/~ 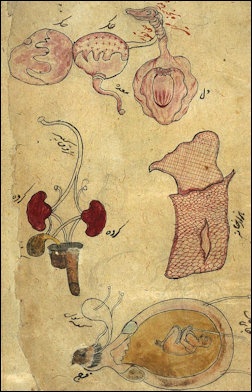 from the Medicine of Akbar

“What is termed classical Islamic medicine developed in medieval times when it far outshone that in Christian Europe, and exerted a significant influence on it. Practitioners say many ingredients in today's treatments were used in Muhammad's time, including honey, olive oil, bee pollen, dates and black caraway - which one ad claims is "a cure for every disease but death." Brury Machendra, secretary-general of the Traditional Herbal Medicine Association of Indonesia, says most Indonesian Muslims don't doubt conventional medicine. But he says Indonesia's health services are so poor and expensive that many people seek out alternatives. Jemaah Islamiyah, an al-Qaida-linked militant network that is essentially banned in Indonesia, is believed to have links to some herbal manufacturers and operate many of the country's Islamic medicine clinics, International Crisis Group says.”~/~

“In Indonesia, traditional medicine really took off after a government promotional campaign in 2009, says Brury Machendra, owner of the Insani Herbal Clinic in suburban Jakarta where Suratmi and up to 400 other patients per month seek treatment. Only one such clinic existed in the Depok suburb two years ago, but now there are 20, with 70 others waiting for government permits. His clinic offers herbal medicine, a bloodletting treatment known as bekam and exorcisms in which a white-gloved therapist places a hand on a patient's head while chanting verses from the Quran.

“An exorcism costs about $12, while Machendra's government-certified herbal products such as the anticancer BioCarnoma and anti-diabetes BioGlukol go for no more than $5 for 60 capsules. He acknowledges that clinics such as his benefit from traditional Muslim rules forbidding certain ingredients and that many fundamentalists "tell people not to go to infidel doctors and say that buying Western medicine is forbidden." ~/~