EATING AND DRINKING CUSTOMS IN THE MUSLIM-ARAB WORLD

EATING CUSTOMS IN THE MUSLIM-ARAB WORLD 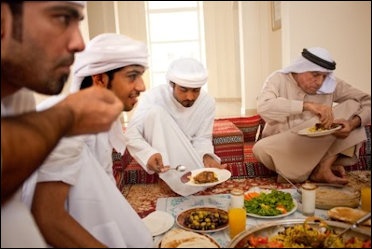 Arabs often say Sabata (“To health”) to start a meal, Amar (“I’m full) when they are finished eating and Dimimah (“May there always be plenty” when they get up from the table. On festive occasions they begin a meal by saying Bismillah (“In the name of God”). Sometimes they say this at the end of a meal. [Source: Middle East and North African Customs and Manners by Elizabeth Devine and Nancy Braganti (St. Martin’s Press)]

Muslims are not allowed to eat off of or wear gold or silver. Muhammad said: "Do not drink in utensils made of gold or silver and do not eat in plates made of either. Such articles are for them of this life and for you in the life to come." He said: "A person who drinks in a cup made of silver drags the fire of hell into his tummy."

Arabs tend to be noisy eaters. Sometimes they belch after a meal to show their appreciation and demonstrate that they enjoyed the meal and signal that they are full. People sometimes eat by plunging their hands into the greasy rice and tearing shreds of meat and stuffing it into their mouthes, often accompanied by noises of pleasure. Don’t add salt to food at someone’s home. It may be perceived as an insult. Leave some food on your plate. Eating everything implies you weren’t given enough.

A lamb or sheep is slaughtered to welcome a guest or mark an important event. Sometimes enough food for 100 people is cooked up when 20 people are invited over dinner. To Westerners thus might seem like an excessive waste. Many Middle Easterners regard it as an opportunity to give leftover food to the poor.

Hands, Forks and Knives in the Muslim-Arab World 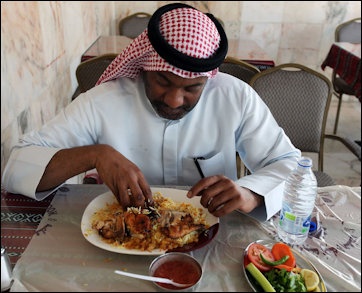 Many Muslims eat with their hands. The Prophet used to eat with his hands, use his fingers to wipe his plate clean, and lick his fingers when he was done. Many also grab food of collective bowls or dishes and don’t have individual plates. [Source: Middle East and North African Customs and Manners by Elizabeth Devine and Nancy Braganti (St. Martin’s Press)]

Eat with right hand. Also try not accept or give the plates or anything for that matter with your left hand. The right hand is for eating, left for cleaning one butt. Arabs have traditionally washed their butt with water and their left hand not with toilet paper. The tradition has its roots in Bedouin customs in an environment without much water. The Qur’an states the right hand is more honorable.

When eating keep your left hand on your lap. Try to avoid placing it your left hand on the table. Smoking a cigarette or drinking water with the left hand is regarded as impure by conservative Muslims. Muhammad said: "the best of alms is that which the right hand giveth, and the left hand knoweth not of." Left handers have to learn to use their right hands. Some people keep heir left hand behind their back when they eat.

Arabs in the cities generally eat with a spoon or fork but sometimes eat with their right hand. Upper class and Western-educated families often sit at a dinning room table and eat with forks and knives. You are more likely to see older people or people in the countryside eating with their hands. People often use bread to mop up their food. Rice is usually eaten with a spoon. When a large number of dishes are eaten, they are generally served at one time on platters and people help themselves. In many cases there are dips and people break off pieces of bread and dip it in the dips.

Meal Customs in the Muslim-Arab World

Even though homes are filled with Western style furniture and many people sit around a table Western-style with chairs and eat with forks and knives many other people stick close to their Bedouin customs and eat and socialize on the floor or around a low table surrounded by pillows. Housewives with modern kitchens put a hot plate on the floor, where she prepares and cooks meals which are served on a rug on the floor of the living room. [Source: Middle East and North African Customs and Manners by Elizabeth Devine and Nancy Braganti (St. Martin’s Press)]

Meals served the traditional way are eaten on the floor around a mat covered with a wide variety of dishes. Guests kneel or sit cross-legged. An effort is made not expose the soles of the feet at anyone or touch the feet to the mat with food on it. The feast is eaten with the right hand. They left hand is often kept behind the back.

Sometimes a prayer or some polite phrases are said before everyone starts eating. Some tea is sipped and some bread is broken and bread nuts and sweets are consumed at the beginning of a meal to stimulate the appetite. The eldest man often serves meal. He or the guest is expected to take the first bite.

The meal itself is often comprised of many dishes, sometimes as many as two meat dishes, two fishes dishes and a half dozen vegetable dishes. People often serve themselves with their hands or servings spoons and eat with their hands.

During feasts often people eat quickly and say little. Rice is rolled up by hand and popped into the mouth. A bowl of drinking water is passed around. Sometimes the meal suddenly ends when the tribal leader gets up and leaves. 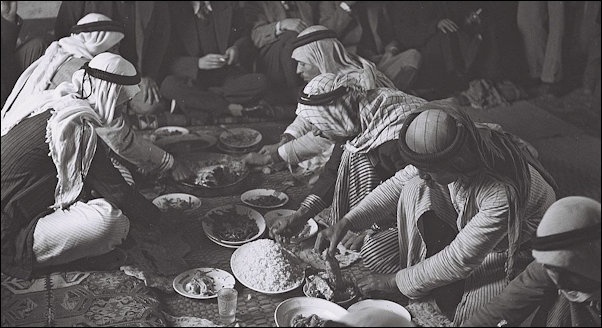 Special Meals and Eating Out in the Muslim-Arab World

Arabs generally don’t eat out except for very special occasions. Entertaining is usually done at home. A lot of entertaining is done at home rather than at a restauran, in part because of an old belief that people who ate at restaurants did so because they didn’t have any family to eat with.

Socializing is generally done before and during a meal. At a dinner party, when a meal is finished guests are usually expected to go home. It is a common custom to refuse food or drink the first time you are offered and then accept it the second time. But once the meal gets going, the host often pushes his guests to eat and eat and guests have to be very firm and determined to show its is time to stop. [Source: Middle East and North African Customs and Manners by Elizabeth Devine and Nancy Braganti (St. Martin’s Press)]

Guests are often served first. Sometimes a sheep is slaughtered in their honor and given a choice pieces—sometimes an eyeball or piece of brain. Sometimes pieces have symbolic meaning. The ears are given to children to make them better listeners. Tongues are given to people to make the more eloquent.

Dinners are often long events, so pace yourself, eat slowly and praise your host and cooks. The meal usually ends with tea. It is considered rude to leave from the table early. Coffee is usually a hint it is almost time to go.

When Arabs go out the person who does the inviting is expected to pick up the check. Splitting the bill is considered very tacky. However, younger people sometimes split the bill. When Arabs go out as a group they sometimes gather around a table that is too small to accommodate everyone. When this occurs, women and children sit down while men stand up.

Muslims and Jews (and some Christians) are forbidden from eating pork. The Jewish and Christian God spoke out twice against eating pork in the Old Testament (in Genesis and again in Leviticus), denouncing the pig as an unclean animal that "pollutes if it is tasted or touched." Allah delivered essentially the same message to Muhammad in the 7th century, but revoked the Biblical taboo on eating camel flesh.

Pork is the only food that the Qur’an specifically forbids Muslims to eat. The Qur’an states: "Forbidden to you (as food) are carrion and blood and swine-flesh." By contrast Jews are forbidden by the Bible from the eating of birds, four-footed beats with "paws" (wildcats, lions, foxes, wolves, dogs and cats), water dwellers with scales or fins (eels, shellfish, whales, dolphins, sturgeons, lampreys, and catfish), "all winged insects that go upon all fours" (with the exception of locusts, crickets and grasshoppers "which leap upon the earth"), "camel, rock badger and hare" and animals that "chew the cud" but are not "cloven footed" (pigs).

Muslims are supposed to watch out for alcohol and gelatin made from pork fat in their food with the same vigilance of vegetarians who scan packaging labels for signs of lard. Vanilla, wine vinegar, cider and perfume are supposed to be avoided because they all contain alcohol. Gelatine made from pork fat is found in marshmallows, cream pies, cake fillings, candies and commercial yoghurt. Some devout Muslims scrap the icing off of cupcakes and cake lest the be contaminated with lard.

Eating pork is for the most part forbidden but if you are crossing the desert and no other food is available it is alright to eat it.

Drinking Customs in the Muslim-Arab World

Muslim law and tradition even describe how a person should drink tea: three slow sips, not blowing on the tea, but waiting for it to cool naturally. Sometimes tea is spilled into a saucer to symbolize generosity of a host. By custom, Arabs generally don’t drink more than three cups of coffee at one time.

The farash system depends on a server who brings coffee or tea to people in their office or shop. He often has an office and is summoned by a buzzer. When tea or coffee is finished it should be given back to the server. It is considered rude to put it on a table because the cup or glass may be refilled and given to someone else. [Source: Middle East and North African Customs and Manners by Elizabeth Devine and Nancy Braganti (St. Martin’s Press)]

If you are nervous about drinking the water, politely ask for a soft drink or tea.

Alcoholic Drinks in the Arab-Muslim World

Islam prohibits the consumption of alcohol. A lot of Muslims drink but they are either very secretive about it and just do it occasionally. In Muslim countries that have alcohol prohibitions alcoholic drinks are generally available at hotels with Western customers. Alcoholic drinks have traditionally been supplied by the Christian community.

Even though most Arabs are Muslims who don't drink, they gave us the word alcohol. Al kohl is Arabic for "a powder for painting the eyelids." Kohl had been used since ancient times as an eyeliner. Later it came to mean exotic substance. Also, ironically, Arabs developed the technology of distillation---a way of making the alcohol content in beverages higher---and introduced it to Europe in Middle Ages.

The Qur’an explicitly prohibits wine made from grape juice but does not mention other fermented drinks. But by saying wine is an analogy for all alcoholic drinks the prohibition on wine can be extended to all alcoholic drinks. Muslims are supposed to avoid perfumes, foods and medicines with alcohol. Women are supposed to be especially careful about entering a mosque wearing perfume.

Muhammad said: "Do not drink wine; for it is the root of all evil; abstain from vice; and when pestilence shall pervade mankind, and you shall be amongst them; and cherish your children." He also said: "he is not a good Muslim who committeth adultery or getteth drunk, who stealeth, or plunderth, or who embezzeleth; beware, beware." Even in places where there is extreme poverty you don't see many alcoholics or drug addicts because the religions ban on alcohol and drugs.