ECSTASY: USE AND HISTORY


ecstasy tablets Ecstasy (or simply "E") is the street name for a euphoric stimulant with mild hallucinogenic effects called MDMA (the abbreviation for 3-4 methylenedioxymethamphetamine). A hybrid of amphetamines and the hallucinogen mescaline, and sometimes called the love drug, it makes people feel good and positive. Some have suggested that of it was given to all the world leaders there would be no war.

Ecstasy is sometimes described as a hallucinogen but it doesn’t cause people to see things that are not there. Rather users say it enhances and distorts sensory perception and time. It works by flooding the brain with serotonin, a feel-good chemical that helps regulate memory, sleep, libido, appetite and temperature.

Ecstasy is taken mostly in the form of pills that come in a variety of colors but are usually white, beige or yellow. Doses per pill vary from 50 milligrams to 300 milligrams. Bootleg pills are very common. They often contain caffeine, amphetamines or ephedrine but not MDMA.

In a study by a team led by Prof. David Nutt of Britain’s Bristol University published in the British medical journal Lancet, alcohol and tobacco were ranked as worse than cannabis and ecstasy using a ranking system that took into consideration physical harms caused by a substance, the potential for addiction and cost to society from its use. Drug guru Sasha Shulgin told the Independent: "There is nothing addictive about psychedelics unless you are one of those people who is going to get addicted to anything." Ecstasy users claim that bad rap that ecstasy receives is propaganda. "E's not a killer drug. It kills fewer people than peanuts," one 19-year-old girl told Newsweek. "it's like you're in a secret club and nobody understands."

MDMA (Ecstasy) was first developed in Germany in 1912 by the drug company Merck as a step in the process of making another drug. Merck took out a patent on the drug in 1914 as a "promising intermediary substance that was hoped could be used to make advanced drugs."

During its first 60 years of existence there was no evidence of anybody or even an animal ever using it. In the 1940s, it was marketed as a treatment for Parkinson’s disease but didn’t attract attention. In 1953, the drug appeared in an animal study at the University of Michigan, funded by the U.S. Army, as part of an investigation on the use of drugs as weapons.

A similar drug, MDA, was popular in the 1960s. Ecstasy was first used in the late 1970s by a small group of avant-garde psychotherapists, who described it as a tool for therapy and a kind of miracle feel-good drug that made patients open up about their feelings.

MDMA structural formula The San Francisco-based chemist Sasha Shulgin, a former employee at Dow, is credited with popularizing the MDMA. In 1978 he published the first scientific papers recommending its use in therapy and later said it had a panacea quality that "could be all things to all people." [Source: The Independent]

Later he gave instructions on how to make the drug in a book called Phenethylamines I Have Known and Loved . Cowritten with his wife Anne, the book contained recipes for 300 mind-altering drugs. It sold 21,000 copies and made Shulgin an enemy and of the U.S. Drug Enforcement Administration. A few years later Shulgin published a sequel called Tryptamines I Have Known and Loved . In this book he described how to make STP, currently sold on the streets as “tripstacy”

In the early 2000s, well into 70s, Shulgin was still experimenting with new psychoactive drugs, often on himself and his wife and their friends. The Independent described one experiments he did with a drug extracted from a Mexican cactus that left him so full of fear he was afraid to move and left his wife afraid she was going to be killed by a contemptuous moon. Of the 12 friends who took the drug, six felt a pleasant high and six became violently ill.

In the late 1970s Shuglin gave MDMA to a therapist friend who called it Adam and introduced it to more than 4,000 people. One of these people hired a chemist in Texas and opened an MDMA lab. He coined the name “Ecstasy” and began selling the drug at bars and clubs in Dallas, where people charged the $20 pills with their American Express cards.

Initially, like LSD in the early 1960s, ecstasy was not illegal. Marriage counselors prescribed it to troubled couples to get them to open up and have positive feelings about one another (hence the nickname the "hug drug") and yuppies bought it and other "designer drugs" at trendy clubs in New York, Los Angeles and San Francisco.

Ecstasy was made illegal in 1985 by the U.S. Drug Enforcement Administration (DEA) after it was found that it damaged the brains of laboratory animals.

Ecstasy made its way to Britain where it was embraced by the Rave and House Music scene that evolved in the mid-1980s. During the late 1980s and 1990s it expanded beyond the fringes into the mass popular culture. By the early 2000, the use of ecstasy was growing faster in the United States than any other drug. It is now becoming increasingly popular in Asia. 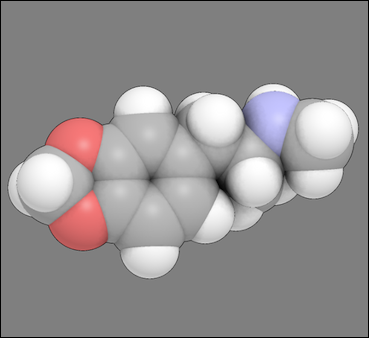 MDMA molecule Ecstasy affects neurotransmitters like dopamine as is the case with amphetamines. It mainly affects nerve cells in the brain that produce serotonin, a chemical that regulates mood and body temperature and is believed to be associated with feelings of well being, emotional stability, bliss, empathy and enhanced cognitive powers.

Serotonin helps transmit electrical signals from one neuron to another. Serotonin neurons originate in the raphe nuclei, near the base of the brain, and extend into the brain through threadlike extensions known axons.

Ecstasy induces intense euphoria, emotional closeness, mild hallucinations and the ability to dance all night non-stop. It doesn't cause bad trips that are sometimes associated with LSD or produce the agitated, wired feeling associated with amphetamines. People generally don't become violent while on Ecstasy and the drug is not considered addictive like cocaine or heroin.

Ecstasy is regarded as a going out drug while heroin is considered a staying in drug. Users generally take ecstasy in pill form and begin feeling empathetic, peaceful and energetic but clear after about a half hour. As the drug takes effect the effects become stronger and users are apt to begin engaging in long conversations with strangers, revealing their inner most feelings, or dancing with great enthusiasm.

Users at clubs sometimes form "cuddle puddles," large groups consisting of individuals who cuddle, hug, touch and massage one another. One 23-year-old woman told Time, "Feathers, toys, lotions, anything. A guy touching your skin with a cold drink. It's delicious."

In Spain, ecstasy is being tested as a possible therapy for people with post-traumatic stress disorder and anxiety. The Multidisciplinary Association of Psychedelic Drugs is an advocate of the therapeutic uses of ecstasy.

Singing the Praises of Ecstasy


ecstasy tablets On the website ecstasy.org, one ecstasy user wrote, "We sing, we laugh, we share, and most of all we care." Another user told Time, it's "six-hour orgasm."

Sixty-six-year-old Anne Shulgin, who had used the drug for 17 years as of the early 2000s, told the Independent, "It dissolves paranoia. One for the great fears that everyone has is that the essential self is a terrible thing. This is a basic unconscious fear. MDMA dissolves that fear and replaces it with a tremendously peaceful acceptance, not just of yourself but of other people, too."

People who do ecstasy often describe great feelings of empathy. One friend told me, "it's not a sexual drug...you simply feel like you love everybody." In the book Buzzed , a first time use said, “The drug takes away all your neuroses. It takes away your fear response. You feel open, clear, loving. I can’t imagine anyone being angry, under the influence or feeling selfish, or mean, or even defensive. You have insights into yourself, real insights, that stay with you after the experience is over. It doesn’t show you anything that isn’t already there. It’s not a trip. You don’t lose touch with the world. You could pick up the phone, call your mother and she’d never know.”

One young woman told Time, "E makes shirtless, disgusting men, a club with broken bathrooms, a deejay that plays crap, and vomiting into a trash can the best night of your life...I had always been aloof, insecure or snobby, however you want to put it. And when I took it and realized, you know that, we're all here; we're all dancing; we're not so different. I allowed myself to get close to people. Everything was positive. But my life became, quickly, all about the next time I would do it...You feel at ease with yourself and right with the world, and that's a feeling you want to duplicate-every single week.”

Describing the appeal of ecstasy, a 19-year-old techno club patron told Newsweek, "Not only is it an all time high, it’s the perfection of the universe. You don't feel cold; you don't feel pain. Everything is beautiful and you can dance all night." Another user told the Face: "I did my first E at Cream [a nightclub] and it was brilliant...I was flying...I'll do two maybe three a night. I go most weeks...I know there's a comedown from E, you feel well battered the next day like, but I never feel weepy like some do."

In spite of posted signs at many techno clubs that warn about the danger of ecstasy, many of the patrons are high on the drug. Glow sticks stimulate the dilated pupils of ecstasy users. Pacifiers relieve the teeth grinding associated with the drug. Ecstasy use is so widespread some clubs have in house doctors.

Club owners like ecstasy because it suppresses aggression and sexual desire and everybody is nice to one another and happy. They much prefer the atmosphere of an ecstasy party to an alcohol-fueled bash.

Raves and House Parties---kinds of anarchist entertainment often held in abandoned warehouses that guests found their way to following enigmatic maps--- emerged in the 1980s amd were closley linked to ecsatcy and other drugs. Electric kool-aid was sold by the glass, ecstasy was widely available and every danced to thumping bass driven psychedelic disco house music.

Describing a central London psychedelic techno club called the Fridge, Katharine Chubbock wrote in Newsweek: "A man is strung up amid flashing lights, gyrating wildly in a leather harness above pulsing throngs of dancers. Rave music grinds at an impossible beat, but pale-faced girls, each with an ounce of eyeliner, keep perfect time." Music critic David Wells of Time out told AFP: Instead of taking 10 pints of lager and going to the match, football fans take ecstasy and all love each other...'E' us, of all the success stories, one of the biggest." 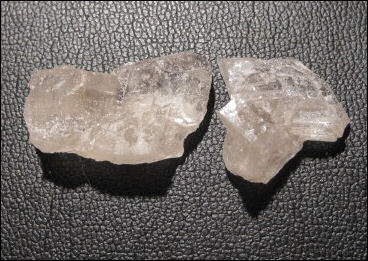 Large it (have a good time)

Mental (bizarre, out of control)

Renton (very short haircut, from the character Renton in the film "Trainspotting")