Dates Dates are the fruit of a desert palm tree. There are 220 kinds of dates, or which about 20 are commercially viable. A popular food in the Middle East, they and found in abundance in the desert and around oases. Many parts of the Middle East would be uninhabitable were it not for date palms. It is one of the few crops that grows in the desert. Date palms have been described as the “tree of life.”

Date palms are highly valued because they provide abundant food in a very harsh place. The trees grow very large; produce fruit for a long time; and can survive long droughts and extremely high temperatures. According to an old Egyptian saying "A date palm is the only creation of God that resembles man. Unlike other trees, a date palm gives more as it grows older."

Dates are among the earliest crops known. They have been cultivated around the Tigres and Euphrates in Mesopotamia since at least 2000 B.C. The Virgin Mary munched on dates when she was pregnant. Dates have been traditionally eaten by Muslims to break their fast during Ramadan. The Koran contains 18 references, most of them good.

The Middle East is the source of two thirds of the world’s dates. The major date producers are Egypt, Iraq, Iran, and Saudi Arabia. The center of the date industry in the United States is Indio California, about 130 miles from Los Angeles. The first date trees were imported here from Algeria in 1900.


date palm fruit Palms grow primarily in tropical areas but are also found in the highlands of the Himalayas and the Andes, in mangrove swamps and in the desert. Members of a diverse plant group that also includes grasses and orchids, they range in height from six inches to 200 feet. Some palms are trees. Some are bushes. Rattan palms, which grow as a vine, can reach lengths of 600 feet or more.

Next to grains and other grasses, palms are regarded as the most useful of all plants. They yield coconuts, palm oil, sugar, dates and materials that are used to make houses, boats, baskets, furniture and other things.

Palm trees do not branch. They generate all their growth from a huge bud at the apex of the tree, which is called the palm heart. It produces leaf after leaf as the plant grows. The palm heart is often very tasty and animals like to eat it. If something happens to it the plant can die. Many palms have sharp spines for protection.

Palm trunk have a pith center but no bark or growth rings. Leaves called fonds fan out from a crown at the top. Some leaves are 30 to 45 feet long and 4 to 8 feet wide. African raffia palms have the world’s largest leaves, reaching 75 feet in length.


date palms Palms bear flowers and fruit. The fruits have hard kernels containing tiny germs. Some kernels, such as dates, are surrounded by a fleshy pulp. The world’s largest seed, a double coconut from the Seychelles, comes from a palm. Most palms begin flowering when they five or six and mature when they are 10 to 15 years old. Some palms live 150 years or more.

Uses and Kinds of Palms

There are several thousand species of palms. Valuable kinds of palm include coconut palms, date palms, sago palms, betel nut palms. Some palms produces a sweet sap that is made into candy, sugar and wine. The nuts of the tagua palm yields vegetable ivory. Carnauba palm leaves produce wax.

Palm tree trunks are used in the construction of houses, boats and bridges that cross canals. They are used to make grids and fences. Elastic fibers that the cover the trunks are used to make camel and horse saddles. Parts of the leafstalk are used as trowels by mason and as beaters by washerwomen. Mats, plates and baskets are made with stalks. Among the other things made with palms are dye, paper, surfboards, and wax.


date palms in Morocco Date palm trees reach a height of 100 feet. They have strong straight trunks that looks like they are covered with bumpy scales. The leaves are feather-shaped and can reach a length of 12 to 18 feet in length. About 12 or 20 leaves are grown each year. They remain alive for several years before turning brown and dropping off.

Dates are seeds Each pistallate flower cluster produces a bunch of dates weighing 10 to 40 pounds. Large trees can produce between 8 to 12 bunches at a time and up 600 pounds of fruit a year. . The dates are very sweet and they have traditionally attracted birds which eat them and disperse the seeds. Temperatures have to be above 16̊C for a tree to produce fruit. 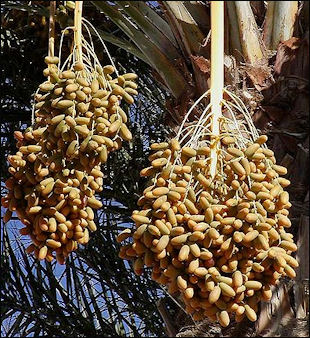 Dates are a kernel surrounded by a fleshy pulp. Rich in fiber, vitamins and minerals, they keep for months without refrigeration; are used as a laxative and a treatment for weak stomachs; and have “slow-burn” and “fast-burn” sugar like those found in energy drinks. Good dates are eaten locally or packaged in factories and often shipped abroad; the poor ones are fed to cattle. Camels eat the pits.

In the Arab world dried dates are nibbled as finger food whole sipping cardamom-flavored coffee. In Middle Eastern souks you can find them prepared in hundreds of different ways. Palm sap, sometimes called logmi, is consumed in drinks and variety of food. Honey-like date syrup is made by mashing fresh dates to a pulp and straining the mash through cheesecloth. It is popular in the Middle East. There are even factories that produce date flakes as a breakfast food.

Date palms have been the traditional staple of the Bedouin diet. They are harvested from palm trees and dried out in the sun and stored for the wintertime when they supply food for a family as well assist herds of camels, goats and sheep. Bedouin could go for months, subsisting on nothing but dates and water. ☼

Date palms provide valuable shade as well as food. The trunks and leaves of date palm tree are burned for fuel and used in the construction of houses, bridges that cross canals, grids and fences. Elastic fibers that cover the trunks are made camel and horse saddles. The parts of the leafstalk are used as trowels by mason and as beaters by washerwomen. Mats and basks are made with stalks. 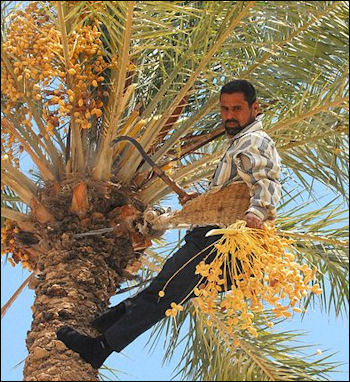 harvesting dates Dates are the biggest oasis and desert cash crop. They are harvested from palm trees and dried out in the sun and stored for the wintertime when they supply food for a family as well assist herds of camels, goats and sheep. Date forests have been tended by the same family for generations. There are high transportation costs to get dates from oasis to ports where they can be shipped.

Date palms grow fairly well in high akali and salty soil and water and require little maintenance. They are grown from shoots and usually begin bearing fruit within four to eight years.

The biggest problem with raising dates has traditionally been getting the fruit down from the top of the tree. Date palms have to be individually pollinated and the fruit picked by hand. These tasks have traditionally been done by men who use ropes to climb the tree like lumber jacks or by young boys limber enough to shimmy up the trees barefoot. The scales on the trunk stick out enough that they an be used as foot holds. The date industry has suffered as more boys get an education and pursue other jobs. These days the dates are often harvested using cherry pickers and mechanical buckets liked those be men installing telephone lines.