deer cowrie Sea shells are a hard means of protection that soft-bodied mollusks build around themselves. Over the eons sea-shell-bearing mollusks have developed a variety into a variety of shapes with a wide range of features such as knobs, ribs, spikes, teeth and corrugations that serve defensive purposes.[Source: Richard Conniff, Smithsonian magazine, August 2009; Paul Zahl Ph.D., National Geographic, March 1969 [┭]]

Mollusks produce their shell with the upper surface of the mantle. The mantle (the upper body of the soft shell animal) is peppered with pores, which are the open end of tubes. These tubes secrete a fluid with limestone-like particles that is applied in layers and hardens into a shell. The mantle often covers the entire inside of the shell like a layer of insulation and shell producing liquid is usually applied in cross-grain coats for strength.┭

The mollusk shell consists of three layers. The outer layer consists of thin layers of a hornlike material with no lime. Below this are crystals of carbonate of lime. On the inside of some but not all shells is nacre or mother of pearl. As the shell grow the shell increases in thickness and size. 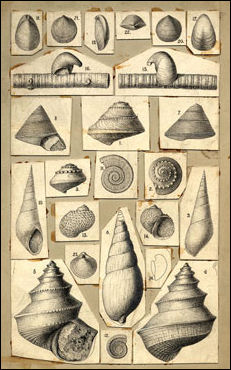 Paleoanthropologists have found beads made from sea shells at sites in North Africa and Israel that are at least 100,000 years old. These are among the earliest examples of art and culture by ancient man. Marine snails were the source of a precious purple dye used by royalty and elite in Phonecia, and ancient Rome and Byzantium. The Greek ionic column, Leonardo da Vinci’s spiral staircases and Rococo and baroque designs were all inspired by snails and other sea shells. Some cultures used cowries for currency. [Source: Richard Conniff, Smithsonian magazine, August 2009]

In the 17th century collecting sea shell was all the rage among the European elite, with the greatest coup that one could achieve was getting a hold of a new shell before anyone else did. The decades-long-running fad began in earnest when the Dutch East India Company began bringing back incredible shells that no one had ever imagined from what is now Indonesia. “Conchylomania”---derived from the Latin word conch ---soon gripped Europe with same intensity as “tulipmania.” [Ibid]

The excesses of Dutch shell collectors reached legendary levels. One collector valued his 2,389 shell so much than when he died he entrusted his collection to three executors who were given three separate keys to open the collection which was housed in three separate boxes one inside the other, Another collector paid three times more for a rare conus gloriamaris than he did for a the Vermeer painting Woman in Blue Reading a Letter , now maybe worth more than $100 million.

Russia's Catherine the Great and Francis I, husband of Austrian Empress Maria Theresa, were both avid shell collector. One of their most prized possessions was the rare 2½ inch wentletrap from the Philippines. In the 18th century these shells sold for $100,000 in today's money. Eighteenth century collectors concluded that only God---“the excellent artisan of the Universe”---could create something so exquisite.

It has been claimed that sea shells were the reason Britain not France claimed Australia. In the early 19th century when British and French expedition were exploring unknown parts of the Australian coast, the captain of the French expedition became preoccupied with “discovering a new mollusk” while the British laid claims to the southeastern coast of Australia, where Sydney and Melbourne were established. [Conniff, Op. Cit]

Scientists that study sea shells are called conchologists. People who supply shells for collectors and souvenir shops usually kill the animal by dipping the shells in very hot water for a minute or so and then removing the body with tweezers. It is better to place the shell in water and to a boil it rather that drop it in boiling water. The latter may cause the shell to crack. Animals are removed from small shells by soaking them in a solution of 50 to 75 percent alcohol for 24 hours.

One collector told Smithsonian magazine that the best way to get the animal out of a shell is to toss it in the microwave. He said pressure builds up in the shell until “it blows the meat right out of the aperture”--- Pow ! ---“like a cap gun.”

One should avoid buying sea shells. Many of these animals are hunted for their shells, accelerating their decline. Still the trade thrives with much of it being conducted these days on the Internet. Among the most well known traders and dealers are Richard Goldberg and Donald Dan. The latter doesn’t even have a website, preferring to work through personal contacts with collectors and personal contacts around the world.

With its thousands of reefs, island, channels and different marine habitats, the Philippines is considered a mecca for sea shell collectors. Indonesia is a close No. 2. The Indo-Pacific region contains the world's most diverse offering of shells and within this vast region the Philippines has greatest variety. The best hunting grounds are said to be around the islands in the Sulu Sea and the Camotes Sea off of Cebu. ┭ 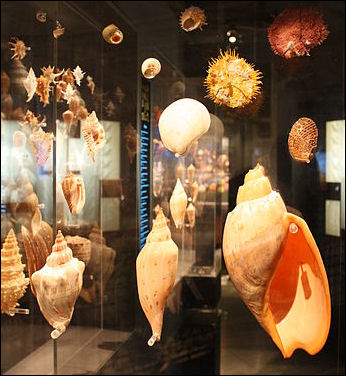 Case of rare sea shells Among the rarest and most sought after of all shells are cowries. These single-shelled mollusks with a zipper-like opening on the bottom come with dazzling variety of colors and markings. Some look like they have the milky way imprinted on the their backs. Others look like eggs with hundreds of lip-stick smudges. Money cowries are still used as currency in some places. Fisherman often attach them to their nets for good luck and brides are sometimes given them to promote fertility. One of the rarest shells is the world is spotted Leucodon cowrie. Only three of them are known to exist in the world, one of which was found in the stomach of a fish. ┭

Some shells are quite valuable, worth tens of thousands even hundreds of thousands of dollars. Arguably the rarest shell today is the Sphaerocypraea incomparabilis , a kind of snail with a dark shiny shell and an unusual boxy-oval shape and a row of fine teeth on one edge. The shell was found by Soviet scientists and hoarded by Russian collectors until it existence was announced to the world in 1990. The shell comes from a creature that was thought to have been extinct for 20 million years. Discovering it was like finding the coelacanth, the famous fossil fish.

A few years a curator of the American Museum of Natural History in New York was showing a S. incomparabilis to a reporter when he discovered one the museum’s two specimen’s was missing. An investigation revealed it was stolen by a dealer named Martin Gill, who had appraised the museum’s collection a few years before. He sold the shell over the Internet to a Belgian collector for $12,000 and he in turn sold it to an Indonesian collector for $20,000. The Belgian dealer refunded the money and the Gill went to prison. [Source: Richard Conniff, Smithsonian magazine, August 2009]

Conus Gloriamaris The conus gloriamaris ---a ten-centimeter-long cone with delicate gold and black markings---has traditionally been one of the most valuable sea shells, with only a few dozen known. Stories about collectors who possessed them are legend. Once collector who managed to purchase a second one at an auction and obtaining possession of it he promptly crushed it to maintain scarcity.

The Conus gloriamaris , has been called the beautiful glory of the seas. "This regal shell," says biologist Paul Zahl, "with its tapered spire and its elegant color patterns reticulated like the finest needlework, satisfies both the artist's requirement of exceptional beauty and the collector's demand for exceptional rarity...Before 1837 only half a dozen were known to exist. In that year famous British collector, Hugh Cuming, visiting a reef near Jagna, Bohol Island..turned over a small rock, and found two, side by side. He recalled that he nearly fainted with delight. When the reef vanished after an earthquake, the world believed that only habitat of gloriamaris had disappeared forever." The shell was so famous that a Victorian novel was written with plot revolving around the theft of one. A real specimen was really stolen from the American Museum of Natural History in 1951. ┭

In 1970, divers found a mother lode of C. gloriamaris north of Guadalcanal Island and the value of the shell crashed. Now you can purchase one for about $200. A similar set of circumstances occurred with the Cypraea fultoni , a kind of cowrie that had been found only in the bellies of bottom dwelling fish until a Russian trawler found a bunch of specimens of South Africa in 1987, causing the price to plummet from a high of $15,000 to hundreds of dollars today.

A small land snail from the Bahamas can seal itself inside its shell and live their for years with no food or water, The discovery of this phenomena was made by a Smithsonian zoologist Jerry Harasewych who took a shell from a drawer, after it been sitting there for four years, and placed in some water with other snails and to his astonishment found the snail started to move. With a little research he found the snails live on dunes among sparse vegetation, “When it starts to get dry they seal themselves up withing their shells. Then when the spring rains come they revive,” he told Smithsonian magazine.

Other unusual species include the muricid snail, which can drill through the shell of an oyster and insert its proboscis and use teeth at the end to rasp the oyster’s flesh. The Copper’s nutmeg snail burrows under the sea bed and sneaks up underneath angel sharks, inserts its probiscus into a vein in the gills of the shark and drink’s the shark’s blood.

Slit shells, which have lovely conical whorls, protect themselves by secreting large quantities of white mucus that marine creatures such as crabs seem repelled by. Slit shells also have the ability to repair their shells after they have been damaged or attacked. Fresh water mussels produce larvae that cling together in long strings that lure fish like bait. When a fish bites one of the strings they come apart, with some larvae attaching themselves to the fish’s gills and making their home there and feeding off the fish.

Other interesting shells include the Giant Pacific triton, which some ethnic groups make into trumpets. The triumphant star produces layers of eggs with long prongs and the Venus comb looks like a skeleton. The strong translucent shells of the windowpane oyster are sometimes substituted for glass. At one time lamps and wind chimes made from these yellowish shells were very fashionable. Filipino fisherman used to dredge these shells up by the thousands to meet the world demand. ┭