JAPANESE BUBBLE ECONOMY IN THE 1980s 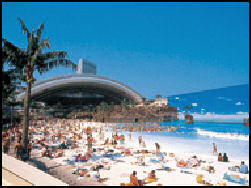 Indoor beach at Seagaia Ocean Dome The "bubble economy" (baburu keizai) refers to period of unparalleled economic growth in the 1980s. The bubble began swelling in 1986 when Japan's share of world exports was at its peak In the next four years assets grew 80 percent. The bubble topped out on December, 29, 1989 when the Nikkei index reached a historic high of 38,915.87, and it appeared Japan was on the verge of surpassing the United States as the world’s most powerful economy.

In the late 1980s after banking laws were relaxed, Japan went on a buying and building frenzy using credit to pay for most of it. The stock market took off and property values soared. The 51-month “bubbleboom” lasted from December 1986 to February 1991. It was brought about by a surge in exports of automobiles and electronics and the availability of cheap capital. Japanese companies built factories at a rapid pace, bought up companies and properties and invested in all kinds of development projects. Speculation pushed Japanese land and securities to astronomical levels.

The episode was set in motion in 1985, when U.S. Secretary of the Treasury James A. Baker III got together with the finance ministers of Britain, France, West Germany and Japan in an effort to reduce the value of the dollar to increase the export of American goods. The plan worked but it also doubled the purchasing power of the yen.

Tokyo banks became the world's biggest and most powerful. Interest rates were so low that loans were practically free and banks and businesses were flush with cash. Japanese businessmen invested and borrowed as if there was no tomorrow, pushing up prices of stock and real estate even further. The influential Japanese philosopher Akira Asada dubbed it “infantile capitalism.”

In the bubble economy businessmen boasted of spending $30,000 in one night out and $300,000 in one week of partying. People flew from Tokyo to Sapporo just to enjoy a bowl of noodles and waved ¥10,000 banknotes to get taxis when taxis were scarce. New hirees bought Armani suits with their first paycheck and men bought Tiffany necklaces for women they just met and persuaded the women to take them because “everyone’s got too much money anyway.”

The period was brought back with the film Bubble Fiction: Boom or Bust (2007). On working during the bubble period, Kate Elwood wrote in Daily Yomiuri, “It was an exciting time...Many companies were doing well economically, and increased globalization had led to a “Let’s give it a go!” attitude in which hitherto sacrosanct business practices were re-examined. Not all proposals were enthusiastically implemented, but there was sense that it was open for discussion...A lot of changes were underway.” 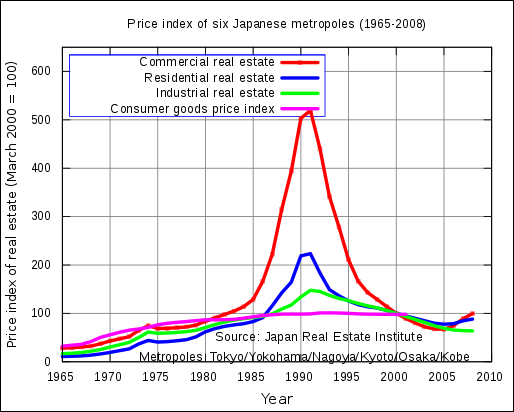 Grandiose Development During the Bubble Economy 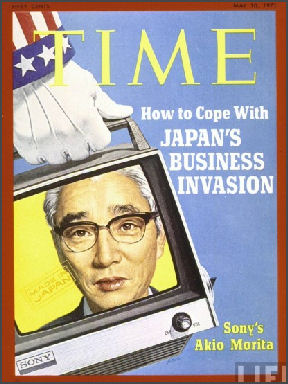 Banks, insurance companies and other financial institutions made many foolish and highly speculative investments.

Seagaia Resort near Miyazaki on Kyushu is one of the best example of an ill-conceived, outrageously expensive bubble economy project. Billed as the world's largest indoor water recreation center, it was 100 meters wide, 300 meters long and 38 meters high, and had a huge 10,000-person wave pool, artificial beach made of crushed Chinese marble, a man-made volcano that erupted every 15 minutes, and a variety of slides, shops and snack bars. The facility also contained a convention hall, 99 holes of golf and four hotels, including one with 45 floors and 753 rooms.

In the wave pool, waves up to eight feet high were generated by a wave machine with 40 computer-controlled vacuum chambers. Underneath the blue sky painted onto the complex's ceiling (which slides open in nice weather and was the world's largest retractable ceiling) were man-made clouds, which slowly drifted by. Ironically the ocean was only a few minutes away.

Seagaia was conceived in 1988, during the height of the Bubble Economy. Built at a cost of $2 billion, it opened in 1994. Planners expected the project to show a profit its first year based on the assumption it would attract 5.5 million visitors. It only attached 2.7 million. The next year it drew 3.86 million, which was not enough to make it profitable. By 1999, the resort owed more than $1.2 billion and its bank refused to lend it any more money. In 2001, Seagaia filed for bankruptcy.

Expensive Real Estate and Investments During the Bubble Economy


Dior building in Ginza Flush with cash, Japanese companies gobbled up real estate in Hawaii and California, including the Pebble Beach golf course, the Hotel Bel Air in Los Angeles and the Grand Wailea and Westin Maui hotels. One tycoon reportedly drove through neighborhoods in Honolulu in a limousine and asked his assistant to ring the doorbell of houses he fancied and make an offer on the spot. Japanese companies also bought up American entertainment companies. Sony purchased Columbia Pictures for $4.2 billion; Matsushita spent $6.1 billion for MCA; and Mitsubishi purchased 80 percent of Rockefeller Center, the home of NBC.

At the height of the bubble economy all the property in Japan, which is smaller than California, was worth five times that of the United States. According to the Guinness Book of Records, the land in central Tokyo around the Mediya Building was the most expensive in the world ever. In October 1988 the Japanese National Land Agency estimated its value at $248,000 a square foot. Mediya is a retail food store. The grounds of the Imperial Palace in downtown Tokyo was said to be worth all the land in California. Australia sold part of the land its embassy was on and paid off half of its foreign debt.

In the late 1980s the richest men in world were Japanese who made billions of dollars in real estate. Some tycoons went as far as coating their food with gold because they believed it was good for their health.

If buyers were a little short of cash Japanese banks were more than happy to come up with the difference. Real estate agents in the United States typically jacked up prices 10 to 50 percent higher if they knew Japanese were involved, One was quoted as saying, “Don’t worry about being expensive. I am sure the banks will help. They always do."

Collapse of the Bubble Economy in Japan


Tokyo Stock Exchange All of this changed when the bubble economy burst. The bubble economy began to collapse in January 1990 as stock prices crashed and continued declining through the year. Property values then nosedived and Japan's high growth economy suddenly stalled and shrunk.

Between December 1989 and August 1992 the Nikkei average dropped from 38,915 to 14,309, producing a loss of $2 trillion. With the declining value of land factored in assets shrank by around $10 trillion. One banker described the loss "as if Japan had entered a detox center after a financial overdose." The effects of the collapse lasted for years. The price of some property dropped 70 percent between 1990 and 2000. A recession lasted more than a decade.

The collapse was brought about by an international recession, foreign competition in export markets, the inability of the government to protect weak banks and business from globalization, the realization that stock prices and real estate values had become inflated in the bubble period, and the that Bank of Japan setting interest rates too low, creating easy money. The bubble itself was blamed on a belief that the good times of the bubble economy years would last forever and poor decision making over what to do with all the cash that poured in.

Mistakes made by the government included, not acting immediately to shut down troubled financial institutions and letting the troubles get worse. The Bank of Japan responded after the January 1990 stock market crash was also starling. In continued raising rates until September 1990 and did not begin cutting them until July 1991, 17 months after the financial crisis began.

Money Lost After the Collapse of the Bubble Economy

The investments made in American entertainment companies by Japanese corporations proved to be equally disastrous. In 1994 Sony announced a $2.7 billion write-off related to the purchase of Columbia. Mitsubishi lost $2 billion after it abandoned Rockefeller Center in 1996.

Salarymen After the Bubble Economy Bursts


Salarymen also suffered. Some lost their jobs as companies began laying off workers. Others, especially employees at real estate firms and stock brokers that collapsed, saw their pension disappear and were forced to work in convenience stores or as taxi drivers to make ends meet.

Some took out large loans to buy their dream homes in the suburbs only to watch the value of their home decline in the 1990s while they endured long commutes to their jobs and had to make mortgage payments at Bubble economy levels. The New York Times talked to one Tokyo city bureaucrat who bought a cramped four-room apartment in the suburb for $400,000, using a loan to pay for almost the entire thing. By 2005 the apartment was worth only $200,000 and he still owed the bank $300,000.

Small company owners were also hit hard. Owners that had expanded in the Bubble Economy suddenly found themselves in debt and unable to sell the land their new factories were built on. Bankers that had been eager to lend money wanted to be repaid.

A jump in the annual suicide rate in 1998 from 22,000 to over 30,000 was tied to economic problems. In 1997 a number of financial institutions collapsed. In 1998, the unemployment rate exceeded 4 percent and the filing of personal bankruptcy exceeded 100,000 for the first time. Fluctuations in the suicide rate and unemployment rate have coincided since the 1970s. In the late 1990s the introduction of performance-based salary systems produced higher unemployment rates and coincided with high suicide rates.

Effects of the Bursting of Bubble Economy

The New York Times reported:“Japan is in the unenviable position of being one of the few nations in recent history to have seen a striking reversal of economic fortune. In 1991, economists were predicting that Japan would overtake the United States as the world’s largest economy by 2010. In fact, Japan’s economy remains the same size it was then: a gross domestic product of $5.7 trillion at current exchange rates. During the same period, the United States economy doubled in size to $14.7 trillion. In 2010, China overtook Japan to become the world’s No. 2 economy. 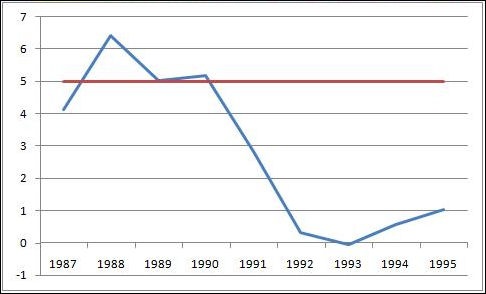 "The bubbles popped in the late 1980s and early 1990s, and Japan fell into a slow but relentless decline that neither enormous budget deficits nor a flood of easy money has reversed. For nearly a generation now, the nation has been trapped in low growth and a corrosive downward spiral of prices, known as deflation, in the process shriveling from an economic Godzilla to little more than an afterthought in the global economy...But perhaps the most noticeable impact has been Japan’s crisis of confidence. Its once voracious manufacturers now seem prepared to surrender industry to hungry South Korean and Chinese rivals.

Martin Fackler wrote in the New York Times, “The decline has been painful for the Japanese, with companies and individuals...having lost the equivalent of trillions of dollars in the stock market, which is now just a quarter of its value in 1989, and in real estate, where the average price of a home is the same as it was in 1983.” Image Sources: Time magazine, Seagaia Sheraton Ray Kinnane, Wikipedia, Andrew Gray Photosensibility