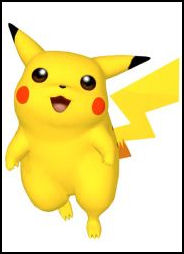 One of the most popular fads to come out of Japan has been Pokemon, a multimedia phenomena that include cards, video games, television shows and a merchandises. Inspired by a Nintendo game about catching and growing monsters, the Pokemon carton first appeared on Japanese television in April 1997 and later made its way to the United States and Europe, where it set off a card trading craze and eventually made its way to every country in the world, except for maybe North Korea.

Pokemon means "Pocket Monsters." Initially there were 151 characters, the most famous of which was Pikachu, a little, yellow, bunny-like creature. Others include Mew, Meowth and Caterpie.

As of the late 1990s, Pokemon had been broadcast in 65 countries and had been translated into more than 30 languages and was featured on the cover of Time.

Pokemon was invented by Satoshi Tajiri, a socially maladjusted nerd from a Tokyo suburb who never went to college but studied electronics at a two-year technical school. As a boy he liked collecting beetles, caterpillars, crayfish and moths. When he go older he played video games and was so devoted to gaming that an arcade gave him a video game machine to take home, which he took apart and figured out.

In 1991, Tajira discovered Game Boy and was intrigued by the possibilities presented by it. He signed a contract with Nintendo, which had been intrigued by his earlier attempts at game programming and his fanzine Game Freak.

Tajiri merged this interest with insects and video games to create Pokemon. He and his friend Tsunekaz Ushihara, who drew the creatures, spent six years developing the game and designing creatures. During that time Tajira often worked 24 hours at a time and then slept 12 hours and lived with his parents because he had so little money.

In the video game and television show the Pokemon spend most of their time battling other Pokemon until one of them passes out (they don't die). Each Pokemon has special strengths and weakness that may apply in some situations towards some Pokemon rival but not in others.

The game is essentially a role-playing version of rock, scissors, paper with a multitude of characters. Players are trainers who raise the Pokemon, sort of like Tamagotchi pets. After a Pokemon is raised it can be used to catch other Pokemon.

Each Pokemon's strength is measured in hit points which indicate how much punishment a given character can take before it passes out. The object of the video game---and for card collectors---is "catch them all"---all 151 Pokemon. This requires a lot of work because the monsters "evolve" and players have to connect to a virtual "Pokemon Center" and with other Pokemon trainers to get some of the monsters.

The card game was similar to the video game and equally complicated, requiring detailed knowledge all 151 monsters. Some kids play the game. Most just like collecting the cards.

Marketing of Pokemon in Japan


The Pokemon video game was introduced in February 1996. Nintendo didn't expect much. By that time many kids had lost interest in Game Boy. The game, however, was an immediate hit. The cards were introduced soon afterwards as a giveaway in Pokemon comic books.

The cards and game were such a hit that Nintendo decided to have the characters animated, giving birth to the television show. The show was also a hit and it generated more interest in the games and cards and other merchandise that followed.

Pokemon eventually became so big that Pokemon theme parks and entire stores that sold nothing but Pokemon merchandise were opened. Pokemon characters were painted on the fuselages of 747s of Japanese airlines that required their flight attendants to wear Pokemon aprons. There was talk that Pokemon could become bigger than Disney.

Pokemon and Convulsions in Japan

In December 1997, 685 children suffered seizures, convulsions, nausea and loss of vision, and 200 were hospitalized with epilepsy-like seizures, muscle-spasms and other problems, after watching an episode of the Pokemon television show in which bright colors, flashing like a strobe-light, burst from Pikachu's eyes after a computer-virus-destroying "vaccine bomb" exploded in the show. One professor said, "this may be the first case of mass suffering from photo stimulation."

Most of the victims were children. One young girl told AP: "Lights kept flickering in my eyes, then I felt sick. It was like getting carsick." One five-year-old child reportedly suffered from severe breathing problems and a housewife fell unconscious. Doctors described their illness as photosensitive epilepsy, or group hysteria.

The next day Nintendo's stock plunged and the show was yanked off the air but reappeared a few months later. Once it returned the show was popular as ever.

Marketing of Pokemon in the United States

Nintendo was originally skeptical about bringing Pokemon to the United States. The game was viewed a role playing game, which had traditionally not gone down in the United States. The company hired the consulting firm 4 Kids Entertainment that was led by Alfred Khan, who help mastermind the Cabbage Patch doll craze in the 1980s and was convinced that Pokemon could succeed in the states.

In the United States, the television show was introduced first. The idea was to expose and introduce the Pokemon characters through the show. The strategy and the timing of it worked like a charm. Children, who were normally difficult to raise in the morning, leapt out of bed early so the could catch the newest episode of the show, which encouraged them to go out and purchase Pokemon cards, sold in sets of 11 for $3, and $30 Pokemon Game Boy cartridges.

The Pokemon television show was given free to American TV stations in return for advertising time. Within a few months after it appeared Pokemon became the top-rated syndicated kids programs. Nintendo then released the video game followed by trading cards, comic books, home videos and books.

Pokemon Frenzy in the United States 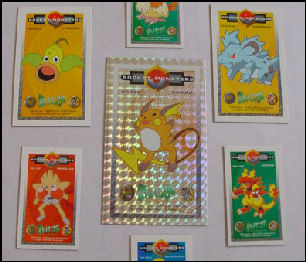 Pokemon cards Pokemon was introduced to the United States in September 1998, and almost immediately set off a frenzy among children anxious to get their hands on Pokemon cards and later games.

Parents initially liked the characters because they were cute, relatively wholesome and required some reading and math to appreciate. But later complained of their children talking about nothing but Pokemon all day long and spending hundred of dollars a year for cards.

Teachers and principals became equally fed up. They complained students were more interested in Pokemon cards than learning and students who lost their cards became very upset. Many school banned trading, and even possession of, of Pokemon cards. Sometimes the situation got very ugly. In New York, a 9-year-old stabbed a schoolmaster in a dispute over cards. 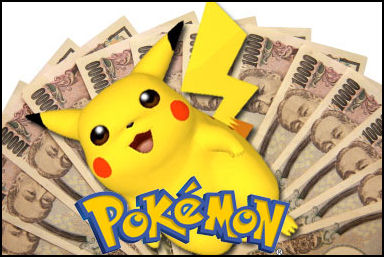 Nintendo made billions from the sales of Pokemon video games and cartridge, television and film rights, and from selling to licensing rights to toy manufacturers like Hasbro, who paid $325 million, and card makers Wizards of the Coast, who made hundreds of millions of dollars.

In 1999 Nintendo stock doubled, millions of cards, game cartridges and production were sold, hard-to-get Pokemon cards were sold on eBay for hundred of dollars, and Pickachu was chosen as one of the "best people" in the Asian edition of Time and pictured on the cover of The New Yorker and TV Guide magazine. After the United States was conquered, Pokemon was introduced to Europe, where it also was successful.

Pokemon has been shown in more than 65 countries in 30 languages. It was banned in Turkey and several Arab countries. See Turkey.

By the summer of 2000, American kids began losing interest in Pokemon. Shops that sold the cards had to offer discounts to move their inventory. By 2003, Pokemon continued to be followed loyally by its core audience of boys, the sale of licensed merchandise---which included Pokemon diapers and gerbil cages’stalled and few products were even on the shelves any more.

Among the reasons the craze suddenly cooled was the fact that 10-year-old were turned off that the Pokemon cards had become popular among 4- and 5-year-olds, that Pokemon was over exposed and the cards were too widely available, that not enough expansion sets were marketed, and that children had become interested in Harry Potter.

In Japan, Pokemon sales also slowed but not as rapidly as in the United States. One reason for this was that more expansion sets were marketed that were designed to keep the interest of children and give them new products to buy. Nintendo had plans to build a "Pokemon World" theme park in Kyoto. 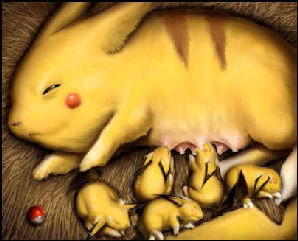 Pokemon experienced a rebirth in the mid 2000s in the United States that was due in a large part to savvy marketing by Pokemon USA---a joint venture created by Nintendo and two other companies that had the marketing rights to Pokemon everywhere outside of Asia.

In the beginning of 2006 Pokemon USA plotted Pokemon’s return. First it took controlled of the Pokemon franchise, including the distribution of cards which as handled by Nintendo and the cartoon, overseen by 4Kids Entertainment.

In April 2007, two new games for Nintendo’s handheld DS---Pokemon Diamond and Pokemon Pearl---were introduced in conjunction with the 10th season of Pokemon cartoon series and a new series of cards with 104 new characters created for Pokemon Diamond and Pokemon Pearl. A new line of toys that featured more than 100 of the 500 Pokemon characters was introduced and that was tied in with the opening a Pokemon boutiques in Toys R Us stores,.

The launch was great success. Cards sold well. Pokemon Diamond and Pearl were the highest rated shows on the Cartoon network. Total merchandise sales was over $50 million in 2007 compared to just $5 million in 2006.

A spokesman for Pokemon USA told the New York Times, “We are on fire...All the elements support each other. The kids play Diamond and Pearl games and watch th e new shows and the immediately want to get the new cards.”