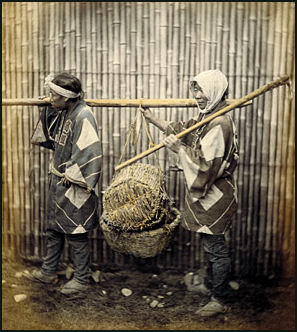 Burakumin in the 19th century The burakumin (boo-RAH-koo-min) are a group of Japanese that are not ethically different from other Japanese yet they traditionally have had a status similar to that of the untouchables in India. In the old days, they were outcasts who performed unclean tasks like slaughtering animals, butchering, tanning skins, making leather products, digging graves and handling corpses.

Many burakumin live in ghettos plagued with crime, alcoholism and unemployment and they have disproportionally low education levels, and disproportionally high numbers of single parent families. The are more likely to have low status jobs. Income levels of burakumin are only 60 percent of the national average and they are five times more likely to receive welfare and 12 times more likely to have children drop out from elementary school than the general population. As is true with ethnic Koreans, there are many burakumin in the yakuza.

Untouchable-like groups can be also be found in Korea (the Paekching), Tibet (the Ragyappa) and Burma (Pagoda slaves).

The history of outcastes in Japan dates back to the 8th century when a class of people were designated to perform “unclean” task and has its roots in the Buddhist prohibitions of killing living things and taboos against touching the dead and the necessity of dealing with these prohibitions and taboos to deal with matters like burying the dead and making leather.

Burakumin descend from Eta (leatherworkers) and hinin (nonpersons), of which some were in charge of torturing suspects, crucifying Christians and sawing the heads off criminals and putting them on display. The class grew in size in the Middle Ages when the demand for leather for samurai armor increased.

Burakumin were forced to live in ghettos and prohibited from marrying people outside their group or living outside their ghettos. They were required to abide by a special dress code and in some cases required to wear special pieces of leather almost like the star of Davids worn by Jews in Nazi Germany. Some shopkeepers loathed them so much they used wash items that were handled by burakumin.

The hereditary designation of burakumin was abolished in 1871 and the derogatory term for the group, "Eta" (meaning "much filth"), has been removed for all intents and purposes from the Japanese language. There about 3 million burakumin (about 2 percent of the Japanese population) in Japan.

The conditions which necessitated the existence of the burakumin have largely disappeared, but prejudice endures. What is unusual about the prejudice is that determining whether someone is burakumin or not is not obvious and often required some research to find out where a person originally came from.

Even though two third of burakumin say they have never encountered discrimination, prejudices endure. Many educated Japanese say they would never let their children marry burakumin and some families and companies hire detective to do background checks to ensure that future employees and family members are not tainted by burakumin blood.

One woman who gave birth to her first baby and then discovered her husband was a burakumin refused to touch her baby and returned home to her family abandoning her husband and child forever. One of Japan's best known politician is a burakumin and he never revealed his secret out of fear it would destroy his political career.

A U.N. report expressed concern over the continuing discrimination of burakumin in the first of printing lists of Buraku households with the names of the occupants to prevent employment of burakumin at major companies. "Particularly hurtful is the use of derogatory terms in speech and writing" of Buraku people," the report said.