DECLINE OF THE TOKUGAWA SHOGUNATE

DECLINE OF THE TOKUGAWA SHOGUNATE 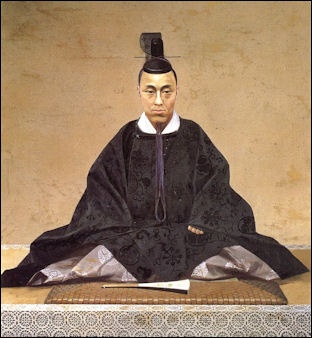 The Tokugawa did not eventually collapse simply because of intrinsic failures. Foreign intrusions helped to precipitate a complex political struggle between the Shogunate and a coalition of its critics. The continuity of the anti-Shogunate movement in the mid-nineteenth century would finally bring down the Tokugawa. [Source: Library of Congress]

According to “Topics in Japanese Cultural History”: “During the 1850s and 60s, Japanese officials and thinkers in the bakufu and the domains gradually came to the realization that major change was necessary if Japan was to escape the fate of China. By 1860, China was well on its way to becoming a colony of the major European powers. It had lost major wars with Britain and France and was under the yoke of unequal treaties that gave Europeans and Americans vast political and economic rights in Asia’s largest empire. Japanese officials had been watching the events in China with unease. Eventually, a combination of external pressure, initially from the United States, and internal dissent led to the fall of the Tokugawa bakufu in 1867. In 1868, a new government began to establish itself. A decade later, a strong, centralized government ruled Japan: the Meiji state.

Good Sources on the Edo Period: Websites Essay on Epoch of Unification (1568-1615) aboutjapan.japansociety.org ; Essay on the Polity opf the Tokugawa Era aboutjapan.japansociety.org ; Wikipedia article on the Edo Period Wikipedia ; Samurai Archives on Tokugawa Ieyasu samurai-archives.com ; Wikipedia article on the History of Tokyo Wikipedia; Making of Modern Japan, Google e-book books.google.com/books ; Books : Edo, The City That Became Tokyo: An Illustrated History by Akira Naito (Kodansha Press, 2003) and Giving Up the Gun, Japan’s Reversion from the Sword by Noel Perrin.

Good Websites and Sources on the Samurai Era in Japan: Good Photos at Japan-Photo Archive japan-photo.de ; Samurai Archives samurai-archives.com ; Artelino Article on Samurai artelino.com ; Wikipedia article om Samurai Wikipedia Sengoku Daimyo sengokudaimyo.co ; List of Shoguns and Emperors of Japan friesian.com ; Samurai Women on About.com asianhistory.about.com ; Classical Martial Arts koryu.com ; Delphi Forums, Good Discussion Group on Japanese History forums.delphiforums.com/samuraihistory. Books: A good book on samurai culture is Miyamoto Murashi (1935), a novel by about a legendary swordsman by Eiji Yoshikawa. The film Last Samurai was based on Bushido-The Soul of Japan, written by Inazo Nitobe in 1899. The Lone Samurai by William Scott Wilson and Shogun by James Clavell are good reads. Vagabond is a popular 27-volume manga based on Miyamoto Musashi by the famous mangaka Takehiro Inoue. You can help this site a little by ordering your Amazon books through this link: Amazon.com. Films: Seven Samurai and Throne of Blood by Akira Kurosawa; The Last Samurai with Tom Cruise; Twilight of a Samurai, nominated for an Academy Award in 2004. Samurai scholar: Karl Friday at the University of Georgia. Samurai Armor, Weapons, Swords and Castles Samurai Arms and Armor artsofthesamurai.com ; Armor from Clan Yama Kaminari yamakaminari.com ; Putting on Armor chiba-muse.or.jp ; Castles of Japan pages.ca.inter.net ; Enthusiasts for Visiting Japanese Castles (good photos but a lot of text in Japanese shirofan.com ; Good Photos of Thousand Warrior Procession at Japan-Photo Archive japan-photo.de ; Seppuku Wikipedia article on Seppuku Wikipedia ; Seppuku---A Practical Guide kyushu.com/gleaner

By 1850, 250 years of isolation had taken its toll on Japan. Stagnation, famines and poverty among peasants and samurai were common place. The samurai and daimyo class had become corrupt and lost the respect of the Japanese people, the government had become bloated (there were 17,000 bureaucrats in Edo in 1850 compared to 1,700 in Washington) and Tokugawa's social and political structures had grown outdated.

Ordinary Japanese paid huge taxes on rice that was used to pay the salaries of a large, dependent samurai class that essentially had nothing to do. In the meantime merchant families, which had become increasingly wealthy and powerful over the years, put pressure on the government to open up to the outside world.

Nineteenth century Edo was not a bad place. It was one of the few places in the world at that time where commoners had toilets. Merchants and whores who hung out in the red light districts went by the names of famous nobles and aristocrats.

Conflicts Between Farmers, the Merchant Class and Samurai 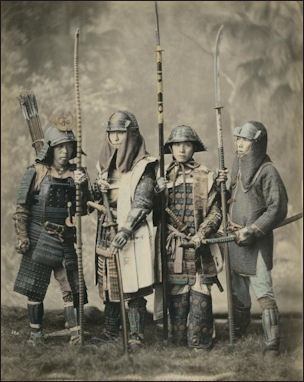 From the outset, the Tokugawa attempted to restrict families' accumulation of wealth and fostered a "back to the soil" policy, in which the farmer, the ultimate producer, was the ideal person in society. Despite these efforts to restrict wealth, and partly because of the extraordinary period of peace, the standard of living for urban and rural dwellers alike grew significantly during the Tokugawa period. Better means of crop production, transportation, housing, food, and entertainment were all available, as was more leisure time, at least for urban dwellers. The literacy rate was high for a preindustrial society, and cultural values were redefined and widely imparted throughout the samurai and chonin classes. [Source: Library of Congress *]

Despite the reappearance of guilds, economic activities went well beyond the restrictive nature of the guilds, and commerce spread and a money economy developed. Although government heavily restricted the merchants and viewed them as unproductive and usurious members of society, the samurai, who gradually became separated from their rural ties, depended greatly on the merchants and artisans for consumer goods, artistic interests, and loans. In this way, a subtle subversion of the warrior class by the chonin took place. *

A struggle arose in the face of political limitations that the shogun imposed on the entrepreneurial class. The government ideal of an agrarian society failed to square with the reality of commercial distribution. A huge government bureaucracy had evolved, which now stagnated because of its discrepancy with a new and evolving social order. Compounding the situation, the population increased significantly during the first half of the Tokugawa period. Although the magnitude and growth rates are uncertain, there were at least 26 million commoners and about 4 million members of samurai families and their attendants when the first nationwide census was taken in 1721. *

Drought, followed by crop shortages and starvation, resulted in twenty great famines between 1675 and 1837. Peasant unrest grew, and by the late eighteenth century, mass protests over taxes and food shortages had become commonplace. Newly landless families became tenant farmers, while the displaced rural poor moved into the cities. As the fortunes of previously well-to-do families declined, others moved in to accumulate land, and a new, wealthy farming class emerged. Those people who benefited were able to diversify production and to hire laborers, while others were left discontented. Many samurai fell on hard times and were forced into handicraft production and wage jobs for merchants. *

By the 1830s, there was a general sense of crisis. Famines and natural disasters hit hard, and unrest led to a peasant uprising against officials and merchants in Osaka in 1837. Although it lasted only a day, the uprising made a dramatic impression. Remedies came in the form of traditional solutions that sought to reform moral decay rather than address institutional problems. The shogun's advisers pushed for a return to the martial spirit, more restrictions on foreign trade and contacts, suppression of Rangaku, censorship of literature, and elimination of "luxury" in the government and samurai class. Others sought the overthrow of the Tokugawa shogunate. * 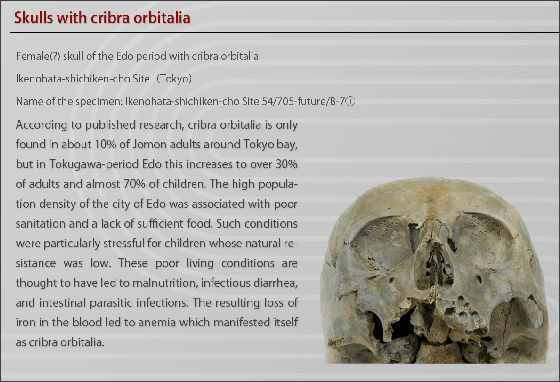 According to “Topics in Japanese Cultural History”: Starting in the 1840s, natural disasters, famines, and epidemics swept through Japan with unusually high frequency and severity. Economic decline became pronounced in many regions, and inflation was a major problem in urban areas. The frequency of peasant uprisings increased dramatically, as did membership in unusual religious cults. Organized society did not collapse, but many Japanese became uneasy about the present and future. Spontaneous, mass religious pilgrimages to famous shrines and temples (okage-mairi) became a frequent occurrence, many of which involved tens of thousands of people. These mass pilgrimages contributed to the unease of government officials officials in the areas where they took place. [Source: “Topics in Japanese Cultural History” by Gregory Smits, Penn State University figal-sensei.org *~*]

“It is not that they were specific uprisings against any of Japan’s governments, but they demonstrated the potential power of emotionally-charged masses of ordinary people. Furthermore, these mass pilgrimages often had vague political overtones of a deity setting a world-gone-awry back in order. Popular art and other media became increasingly obsessed with death, murder, disaster, and calamities of all kinds, and this tendency became quite pronounced by the 1850s. Urban riots (uchikowashi), typically in protest of high prices, also broke out in the cities. The bottom line is that large numbers of people were worse off in the 1840s and 50s than they had been in previous generations, the Tokugawa system was old and inflexible, and there was a general anxiety and sense that the world would soon change in a big way.” *~*

Impact of China on Japanese Idealists in the Mid 1800s

Describing Shanghai in 1862, two decades after the first Opium War, Takasugi Shinsaku, a young Japanese man, wrote in his diary: "There are merchant ships and thousands of battleships from Europe anchored here. The boat slips are filled with masts." The Western-style architecture on the Bund was "beyond description." A large fortress, the heart ofl old China, was situated on the Huangpu River. Behind the fortress walls was the old city of Shanghai and the British and French settlements lay outside this. [Source: Takahiro Suzuki, Yomiuri Shimbun, December 9, 2014 ^^^]

At that time, the difference between the inside and the outside of the fortress walls was stark. "The inside was less advanced, dark and poor, whereas the Shanghai settlement was modern, developed and prosperous," said Prof. Chen Zuen, who teaches the modern history of Shanghai at National Donghua University, told the Yomiuri Shimbun. "There was a great contrast in living conditions inside and outside the walls....When the British or French walk down the street, the Qing people all avoid them and get out of the way. Shanghai has become like a British or French territory. Japan must keep its guard up." Yoshihiro Baba, a Japanese businessman in Shanghai, told the Yomiuri Shimbun. "You become much more aware of Japan when you go abroad. You long for the mountains and rivers back home."^^^ 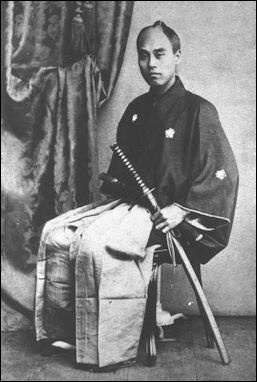 Takahiro Suzuki wrote in the Yomiuri Shimbun, “Takasugi was impressed by his visit to the Wen Miao (Confucian temple), located centrally within the castle walls. The land had been conceded to the British Army back then in order to protect Shanghai from rebels. Seeing that the British Army acted as if they owned the place, Takasugi jotted down in his diary, "Deplorable, indeed." After a two-month stay in Shanghai, Takasugi returned home with a rising sense of crisis toward Japan’s old-fashioned feudal government. A year later, he established the Kiheitai volunteer militia - comprising members of various social classes - and the unified Choshu domain, which centred around those plotting to overthrow the shogunate. Choshu’s victory in 1866 against the second Choshu expedition spelled the collapse of the Edo shogunate. However, Takasugi became ill and died in November 1867 without witnessing the return of political power to the emperor. ^^^

“It is not difficult to imagine how Takasugi’s daring actions had roots in his experiences in Shanghai. Takasugi was born as the eldest son of a samurai family of the Choshu domain in present-day Hagi, Yamaguchi Prefecture. He studied at the Shokasonjuku, a private academy established by Yoshida Shoin, and participated in the movement to restore the emperor to power and expel foreigners. After the Choshu domain fired at Western ships in the Kanmon Straits in 1863, Takasugi was put in charge of Shimonoseki’s defence. He then established the Kiheitai volunteer militia, which welcomed members of various social backgrounds. Furthermore, he was entrusted with the role of peace negotiations when a combined fleet of British, French, Dutch, and American ships bombarded Shimonoseki. He was a field commander during the shogunate government’s second Choshu expedition. Takasugi died of tuberculosis six months before political power was returned to the emperor. ^^^