May 4th Protest in 1919 China has a long history of opposition movements and activities and brutal crackdowns launched in response to them. The 20th century was no different with Tiananmen Square being only the last and largest of several protests that took take place after the Communists came to power.

Books About Tiananmen Square: Timothy Brook’s “Quelling the People: The Military Suppression of the Beijing Democracy Movement” is regarded as the most complete book on Tiananmen Square. According to Ian Johnson it is “a work by a classically trained historian who turned his powers of analysis and fact-digging on the massacre. Even though Brook’s book doesn’t include some important works published in the 2000s (especially the memoirs of then Party secretary Zhao Ziyang and a compilation of leaked documents known as The Tiananmen Papers), Quelling the People remains the best one-volume history of the events in Beijing.” One should also note the works of Wu Renhua, a Tiananmen participant and author of several Chinese-language works, as well as a a book by Jeremy Brown of Simon Fraser University.

In 1919, at the Versailles peace conference after World War I, the Allied powers handed over German possessions in Shandong province to the Japanese and announced that they had no plans to return lost territory to China. Anti-foreigner resentment in China rose. On May 4, 1919--after the Versailles decision was announced--about 3,000 students, scholars and dissident intellectuals from 13 colleges gathered in Tiananmen Square to protest in the loss of Chinese territory to Japan.

The protests led to the creation of the May 4th Movement—a nationalist movement opposed to the authoritarian government. They adopted "Science and Democracy" as their slogan and staged patriotic and sometimes bloody protests through out the 1920s.

The May Forth Movement was the first major Chinese major opposition movement of the 20th century. Students carried signs marked with "Mr. Science" and "Mr. Democracy," slogans that would reappear at Tiananmen Square in 1989.

Book: The Gate of Heavenly Peace by Jonathan Spence is about intellectual unrest at the end of the 19th century and the May Forth Movement. 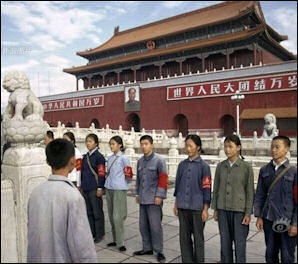 Red Guards there during the Cultural Revolution

As part of the effort to encourage the participation of intellectuals in the new regime, the Chinese Communist Party began an official effort to liberalize the political climate in mid-1956. Cultural and intellectual figures were encouraged to speak their minds on the state of CCP rule and programs. Mao personally took the lead in the movement, which was launched under the classical slogan "Let a hundred flowers bloom, let the hundred schools of thought contend." At first the party's repeated invitation to air constructive views freely and openly was met with caution. By mid-1957, however, the movement unexpectedly mounted, bringing denunciation and criticism against the party in general and the excesses of its cadres in particular. Startled and embarrassed, leaders turned on the critics as "bourgeois rightists" and launched the Anti-Rightist Campaign. The Hundred Flowers Campaign, sometimes called the Double Hundred Campaign, apparently had a sobering effect on the CCP leadership.

In April 1957, the Communist government briefly allowed public discussion of controversial issues and criticism of the government when Mao put forward the idea of "letting a hundred flowers bloom" in the arts and "a hundred schools of thought contend" in the sciences. In the Hundred Flowers campaign intellectuals were advised to contribute their opinions on national policy issues. They condemned corruption and criticized the Communist party monopoly on power. Even Mao joined in. In a rambling speech on the "The Correct Handling of Contradictions Among the People," Mao admitted that 15 percent or more of the Chinese population was hungry and he was not surprised that some people were "disgusted" by Marxist inefficiencies.

After only five weeks the government had second thought about the Hundred Flowers Movements and the concept of freedom of expression and launched the Anti-Rightist campaign. The Anti-Rightist Movement, which lasted from 1957 to 1959, consisted of campaigns to purge alleged rightists within the Communist Party both in China and abroad. The term "rightists" was largely used to refer to intellectuals accused of favoring capitalism over collectivisation.

In March 1976, two months after Zhou Enlai's death, thousands of people showed up to mourn him at Tiananmen Square during the Qingmang Festival, a traditional holiday that honors the dead. In an incident that resembled the Tiananmen Square incident in 1989, the outpouring of grief grew into protest against the government and the Cultural Revolution, and Mao ordered police to disperse the crowd. Hundreds were hurt and arrested and leaders were denounced for mounting a "counterrevolutionary insurrection."

Chinese showed their respect to Zhou by laying wreathes and poems at the foot of the Monuments of Martyrs of Revolution. "The demonstrations," one Chinese scholar said, "aimed to honor Zhou Enlai and criticize the Gang of Four, and not to support Deng Xiaoping, but it became clear that he had played a role in the background. Some wreaths were brought in by work units, so there must have been official approval."

The demonstrations started to turn ugly when a crowd began to defy security forces who had taken away the wreaths on April 5. Vehicles were burned and government building attacked before police moved in. Maybe a dozen or so people were killed.

The Democracy Wall movement began in late 1978 when protestors began attaching "big character posters" to a stretch of wall in Beijing west of the Forbidden City. The dissident Wei Jingsheng was an important leader in what became known as the "Beijing Spring" demonstration of 1979. Today, in the place where Democracy Wall once stood is a Pizza Hut.

The Democracy Wall itself was a kind of anti-government, pro-democracy bulletin board. People put up poems, essays, mimeographed articles. Huge crowds showed up. They had lively discussions about what they read. One of the last posters to appear on Democracy Wall read: "if you close the people's mouth's and let them say only nice things, it keeps the bile inside."

Deng eventually ordered the wall torn down. Participants were brutally suppressed. For putting a poster on Democracy Wall, the activist Betty Zhang was confined to a bed-size room, beaten with an electric prod, and had bone marrow removed from her spine. After spending six years in prison she was released and was then prohibited from getting married and required to get an abortion when she got pregnant.

Wei Jingsheng, considered by many to be the "father" of China's democracy movement, attached an essay at 2:00am on December 5, 1978 that called for the "Fifth Modernization," meaning that democracy should be added to the "four modernizations" (industry, agriculture, technology and national defense) outlined a few months earlier by Deng.

After a seven-hour trial in 1979, Wei was convicted of "counterrevolutionary" activities and leaking information about China's war with Vietnam to a reporter and sentenced to 15 years in prison, where he lost teeth from malnutrition, endured abuse by criminal inmates, and was harassed with constant noise and light kept on in his cell all night. While in prison his family and girlfriend heard nothing from him. There were rumors that he died or developed schizophrenia. In the end he became one of China’s most famous dissidents. See Dissidents, Government

Tiananmen Square in the 1980s 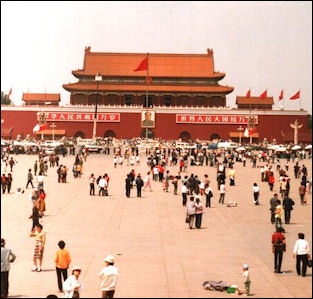 In December 1987, chanting and banner-carryingstudents briefly demonstrated at Tiananmen Square and took to the streets in Beijing calling for democracy, press freedoms, electoral reforms, multiparty elections, official permission to demonstrate, sexual freedom and better food in the cafeterias. In January 1988, a reformist Communist Party chief was made a scape giants for the protests.

The right to demonstrate is written in the Chinese constitution but demonstrators are supposed to give five days notice and provide a list of all the participants. Student demonstrations have traditionally been held at the end of the term in December and January. To disrupt the protestors during that time of the year, water trucks have sprayed Tiananmen Square and turned it into a large sheet of ice.