CREATION OF CHINA AND DYNASTIC RULE


Emperor Qin Over several millennia, China absorbed the people of surrounding areas into its own civilization while adopting the more useful institutions and innovations of the conquered people. Peoples on China's peripheries were attracted by such achievements as its early and well-developed ideographic written language, technological developments, and social and political institutions. The refinement of the Chinese people's artistic talent and their intellectual creativity, plus the sheer weight of their numbers, has long made China's civilization predominant in East Asia. The process of assimilation continued over the centuries through conquest and colonization until the core territory of China was brought under unified rule. The Chinese polity was first consolidated and proclaimed an empire during the Qin Dynasty (221--206 B.C.). Although short-lived, the Qin Dynasty set in place lasting unifying structures, such as standardized legal codes, bureaucratic procedures, forms of writing, coinage, and a pattern of thought and scholarship. These were modified and improved upon by the successor Han Dynasty (206 B.C.--A.D. 220). Under the Han, a combination of the stricter Legalism and the more benevolent, human-centered Confucianism---known as Han Confucianism or State Confucianism---became the ruling norm in Chinese culture for the next 2,000 years. Thus, the Chinese marked the cultures of people beyond their borders, especially those of Korea, Japan, and Vietnam. [Source: Library of Congress *]

Much of what came to constitute China Proper was unified for the first time in 221 B.C. In that year the western frontier state of Qin, the most aggressive of the Warring States, subjugated the last of its rival states. (Qin in Wade-Giles romanization is Ch'in, from which the English China probably derived.) *

Once the king of Qin consolidated his power, he took the title Shi Huangdi (First Emperor), a formulation previously reserved for deities and the mythological sage-emperors, and imposed Qin's centralized, nonhereditary bureaucratic system on his new empire. In subjugating the six other major states of Eastern Zhou, the Qin kings had relied heavily on Legalist scholaradvisers . Centralization, achieved by ruthless methods, was focused on standardizing legal codes and bureaucratic procedures, the forms of writing and coinage, and the pattern of thought and scholarship. To silence criticism of imperial rule, the kings banished or put to death many dissenting Confucian scholars and confiscated and burned their books. Qin aggrandizement was aided by frequent military expeditions pushing forward the frontiers in the north and south. *

To fend off barbarian intrusion, the fortification walls built by the various warring states were connected to make a 5,000- kilometer-long great wall. (What is commonly referred to as the Great Wall is actually four great walls rebuilt or extended during the Western Han, Sui, Jin, and Ming periods, rather than a single, continuous wall. At its extremities, the Great Wall reaches from northeastern Heilongjiang Province to northwestern Gansu. A number of public works projects were also undertaken to consolidate and strengthen imperial rule. These activities required enormous levies of manpower and resources, not to mention repressive measures. Revolts broke out as soon as the first Qin emperor died in 210 B.C. His dynasty was extinguished less than twenty years after its triumph. The imperial system initiated during the Qin dynasty, however, set a pattern that was developed over the next two millennia. * 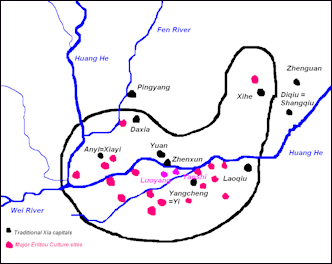 Dr. Robert Eno of Indiana University wrote: “The Chinese have traditionally conceived their history in terms of their rulers. More specifically, since the royal throne was normally handed down from father to son, the Chinese have spoken of their past in terms of “dynastic eras,” periods of time during which a single lineage occupied the throne. The earliest dynasty for which we have certain historical evidence is known as the Shang Dynasty (sometimes referred to as the Yin Dynasty). The Shang Dynasty probably began about 1600 B.C. and endured until about the year 1045 B.C. [Source: Robert Eno, Indiana University indiana.edu /+/ ]

“The Shang Dynasty was succeeded by the Zhou Dynasty (Zhou is pronounced like the name “Joe” B.C.), which lasted a very long time (1045-256, although the latter date is often listed as 221 B.C., the year that a successor dynasty was formally installed B.C.). Because Zhou history is so long and diverse, the chronology of the Zhou is usually conceived as a succession of periods: Western Zhou (1045-771 B.C.); Eastern Zhou (770-221 B.C.); Spring and Autumn Period (722-453 B.C.); Warring States Period (453-221 B.C.). The last two periods are considered “Classical China” because that is when the philosophers that created the ideas on which China was founded lived. You may encounter variant dates for these periods in your outside readings – different writers have different criteria for demarcating them, and there is actually considerable controversy about the date of the Zhou conquest of the Shang. /+/

“The Chinese of the Classical period believed that prior to the Shang Dynasty there had been a long dynasty called the Xia (pronounced close to sha). Earlier yet, there had been a succession of “sage rulers” – some taking the throne by hereditary succession, others by virtue of their semi-divine merit. Although we will not treat these pre-Shang rulers as historical in this course, we will consider at some length their significance to the Classical vision of history. /+/

“The Zhou Dynasty actually lost effective power in 771, and the succeeding 52 centuries – the Classical era – were a period of political fragmentation and social chaos, resembling in some ways the situation in Europe during the Dark Ages after the fall of Rome. In the Chinese case, however, social disruption led not to a dark age, but to an era of great social growth and intellectual activity. [Source: Robert Eno, Indiana University indiana.edu /+/ ] 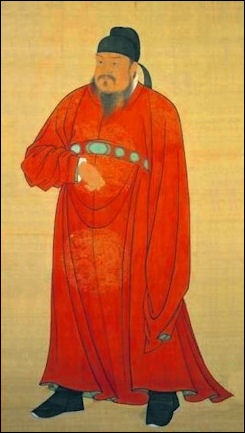 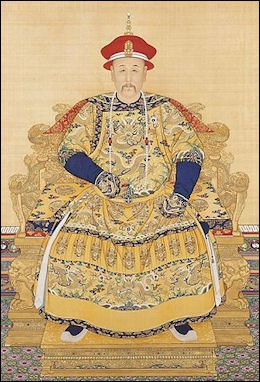 Much of what came to constitute China Proper was unified for the first time in 221 B.C. In that year the western frontier state of Qin, the most aggressive of the Warring States, subjugated the last of its rival states. (Qin in Wade-Giles romanization is Ch'in, from which the English China probably derived.) [Source: The Library of Congress *]

Dr. Eno wrote: “ The era of disunity, the Spring and Autumn and Warring States periods, came to an end in 221 B.C., when the state of Qin conquered all the other states that had grown to independent status within the fragmented polity of the late Zhou. The Qin united China under a single strong government, as had been the case during the Shang and the Western Zhou. /+/

“The Qin celebrated the power of this government and of its ruler, a supreme autocrat who called himself an “Emperor” rather than a “King.” Because of this name change, we generally speak of China from the Qin until this century as “Imperial China,” while the Classical and earlier eras are termed “pre-Imperial.” The distinction makes some sense – as we will see, the nature of the Chinese state does change very dramatically after 221 B.C. However, the Zhou state was actually no less an “empire” than the Qin later became: both periods saw the rapid expansion of Chinese power into areas that were initially not part of the Chinese polity. /+/

“The Qin Dynasty was not long lived. It was unusually tyrannical in its form of autocracy and was overturned by rebellion only fifteen years after its formal founding. The successor dynasty, the Han, endured, with one interruption, for four centuries. The Western Han (or Former Han), lasted from 206 B.C. until A.D. 220, with a hiatus during years A.D. 8-23. Dramatic changes occurred during the Han, and it forms a bridge between what we may call ancient China, and what is sometimes termed “medieval China.” G380 will only carry us part way into the Han. We will close as the patterns of the ancient era fade into new structures of state and society, about the year 100 B.C. /+/

Edward Wong wrote in the New York Times: In dynastic eras, palace upheavals were often catalyzed by paranoia and jealousies within the imperial family. From Qin Shihuang, the first emperor, to the Empress Dowager Cixi to Mao Zedong, China's rulers have tended to suspect conspiracies against them and their close kin and have looked for assassins in the shadows. The same fears can arise within aristocratic Communist families today, especially among those vying for leadership positions.

Until the 1911 Revolution led by Sun Yat-sen, Chinese history had consisted of 24 dynasties. Broadly speaking, the founding emperor of a dynasty seized power by force and eventually passed the reign to his son. The dynasty would continue until faced with serious problems such as famine, war or revolution. Ultimately, the old dynasty would be overthrown by a new regime, which in many cases was headed by the leader of usurping revolutionaries. [Source: Sun Wukong, Asia Times, July 31, 2008]

Sun Wukong wrote in the Asia Times, "Two points can be taken from this. First, Chinese have historically accepted that 'whoever has fought on horseback to seize all under Heaven' is entitled to rule, but such acceptance is not automatically extended to the offspring or relatives of the ruler. Second, because the legitimacy of successive rulers is questioned, Chinese are inclined to replace leaders who fail to run the nation well. As another saying puts it: "People take turns becoming the emperor, and this year it may be my turn."

“It was through violence that Sun Yat-sen founded the Republic of China, and the same is true for Mao Zedong and the People's Republic of China. Neither man, however, passed their power to their sons. Mao and Deng had fought “on horseback” to seize power and thereby gained the legitimacy to rule. But leaders after them have had to justify their right to rule through performance. President Hu Jintao and his predecessor Jiang Zemin were handpicked by Deng."

scene from Romance of the Three Kingdoms

Rise and Fall of Dynasties in China

After China became unified as a kingdom, its history has been characterized by the rise and fall of dynasties that follow a fairly consistent pattern: the creation a dynasty, unification and the restoration of order under the dynasty, a period of prosperity followed by the decay and collapse of the dynasty, and the eventual re-creation of the kingdom under a new dynasty.

The great Chinese dynasties---Han, Tang, Song, Ming---where punctuated by 60 to 100 periods of unrest in which the kingdom was harassed by attackers from the north or divided into states dominated by competing warlords.

The location of China's capital has been changed many times. Emperor Qin established the first capital of China in Xian in 221 B.C. and the Han emperors continued to keep their court there during their rule. After centuries of chaos the Sui dynasty established their capital on the ruins of Xian in a city they called Chang'an. Under the Tang emperors, Chang'an grew into a dynamic metropolis of two million people. The Song emperors first had their capital in Kaifeng and then moved it to Hangzhou when they were driven south. The Mongols (Yuan dynasty) moved the capital to Beijing. The first Ming emperor moved the capital south to Nanjing to escape the threat of barbarian attacks from the north. The Ming emperors that followed him moved the capital back to Beijing in 1420, where it has more or less remained ever since.

While Emperors came and went China changed very little in part because it was governed on a day to day basis by a bureaucratic class that changed very little. The government under this bureaucracy was unresponsive to the needs of ordinary people, unrepresentative, concerned with control and order, and had little contact with the people it ruled. Some might say the same conditions exist today.