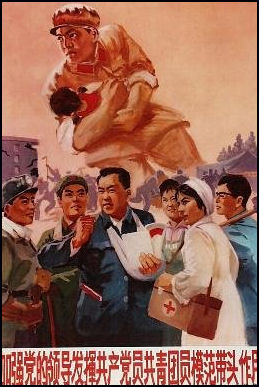 Disaster preparedness poster There has always been natural disasters in China. Some have shaped its history. China is so big that there is some kind of natural disaster every year. The Chinese believe that natural disasters foretell the end of a dynasty or the death of a great ruler. Mao was very ill before the catastrophic Tangshan earthquake and sure enough he died six weeks after the earthquake hit.

Associated Press reported: “Central authorities' ability to respond to natural disasters has been seen as tests of legitimacy for centuries. Chinese emperors put state resources into controlling floods, and earthquakes and other disasters were believed to be signs that a dynasty was losing the "mandate of heaven." The state-run tabloid Global Times boasted in an editorial of China's communal "disaster-relief" culture, and its "more mature" response to the latest quake, comparing it favorably to those overseas. "In its ability to mobilize people and in other indicators, China's disaster relief comes ahead of the United States, Japan and other developed countries," the newspaper said.

Figures for natural disasters are not always accurate. In July 2008, officials in Shanxi Province announced that 11 people had been killed in a natural landslide. An investigation after an Internet-lodged complaint discovered that 41 villagers had been buried under a torrent of rocks and waste from an iron mine.

2010 was a bad year for natural disasters, particularly droughts and floods which caused extensive crop damage and food prices rises. An estimated 80 million people needed food relief in the winter of 2010-2011 as a result of food shortages.

Landslides and Sinkholes in China

Mudslides and flooding are common in China's mountainous areas, killing hundreds of people every year. Deforestation has led to soil erosion and made some parts of China prone to mudslides after strong rains.

According to the Guinness Book of Records, the deadliest landslide ever killed 180,000 people in Gansu Province on December 16, 1920. It was caused by a powerful earthquake.

In September 2003, 12 people were killed when a landslide buried a group of cave houses in the village of Liangjiagou in Shaanxi Province. Most of the dead were in one cave house that was hosting a party for family members after the birth of a son.

In May 2003, 35 construction workers who were building a highway in Guizhou Province were killed when they were buried under a landslide that occurred after heavy rain.

In 2003, 100 villagers in southern Guangdong were forced to evacuate their homes when the earth under their community suddenly began to sink. Houses split and compassed around the village of Tieken as about 30,000 square meters of earth caved in. The largest sunken area was about 10 square meters and sunk to a depth of about five meters. It is believed that underground streams and caves beneath the community caused the subsidence.

In June 2003, torrential rains and landslides in southern China left at least 148 people dead and caused $730 million in damage.

In July 2003, a massive landslide in Sichuan Province left at least 52 people dead. The landslide was caused by flash floods.

Landslides kill between 800 and 1,000 people a year. Many of the deaths are in Asia, where large numbers of people live in landslide-prone areas. Landslides generally occur on steep, unstable slopes after intense and extreme rainfalls. There are concerns that global warming could increase the risks of landslides.

In June 2008, 19 workers in a brick factory in Luliang city in northern China were killed when a landslide engulfed their factory.

In August 2009, 20 people went missing after a massive landslide blocked the Dadu River in Sichuan Province and threatened a hydro-electric dam.

In November 2008, a mudslide near Chuxiong city in Yunnan Province left 15 dead and 34 missing. It wasn’t clear what caused the landside as there were no reports of heavy rain in the region.

In the summer of 2010, scores were left missing after torrential rains triggered massive landslides in southern and western China. A massive landslides covered all but the tallest buildings in Ulandi township, a remote mountain community in Yunnan Province, and more than 100 people were killed.

In March 2010, 27 people were killed by a landslide in a remote part of Shaanxi Province near the village of Shuabfhuyi. Most of the dead were in 25 houses that were buried when a mountainside came crashing down on them. One 20-year-old man miraculously was rescued after being buried for 54 hours. His 17-year-old sister was also rescued but she died from her injuries.

In August 2010, over 1,750 people were killed by mudslides triggered by heavy rains that swept through villages in the Zhouqu district of Gansu Province in northwest China. Three villages were swallowed up by waves of mud and rubble-strewn water. Hundreds of homes, including every structure in one village were completely buried. People died in four-story high buildings that were complete engulfed by mud. [Source: AP and Reuters]

About 134,000 people, most of them Tibetans, live in the Zhouqu District. The Bailong River which runs through the region swelled with rain and jumped its banks and was blocked by debris from the mudslides. Mudslides swept down the tributary valleys that ran into the Bailong River. The town of Zhouqu, which the river runs through, was one-third underwater.

More than 45,000 people were forced to evacuate their homes. Many of these people were put up in tents trucked in by the government. Rescue efforts were hampered by heavy rains that continued to fall after the mudslides. Additional mudslides killed dozens more people, blocked roads bringing relief supplies and made life miserable for people living in tents and shelters. A debris dam that was blocking the river, creating a dangerous artificial lake that could have burst through dam at any moment, was breached and drained with explosives. Providing clean drinking water was a primary concert as local sources were either knocked out are too polluted for consumption. Numerous cases of dysentery were reported.

In some houses, everyone was killed. Bodies were wrapped in blankets and tied to sticks or placed on planks and on debris-filled streets for pick up. A few people were rescued several days after the mudslides when they were pulled out of mud-enveloped homes. Much of the rescue work was done by hand with simple tools such as shovels, hoes and ropes as it was initially too difficult to get heavy equipment into the area. Chinese Premier When Jiabao arrived quickly the scene to comfort survivors and offer moral support to rescuers.

One survivor making coffins told AP, “These are all for relatives killed in the mudslide. It was unexpected---a huge landslide like this. There’s nothing left. We managed to escape with our lives. As for relatives, 10 to 20 died from my village.”

Some blamed the disaster on heavy tree-felling and rapid hydro development which made regions such as the one struck by the mudslides in Gansu vulnerable to flooding, landslides and mudslides. Government reports released in 2009 said work needed to be done to protect areas deemed “high-occurrence disaster zones for landslides.” In addition, soils, geological stata and mountain slopes in the region are said to have been weakened by the huge 2008 Sichuan earthquake, whose epicenter was not far from Zhouqu.

In October 2012, Associated Press reported: “ A landslide toppled an elementary school building and buried 18 students in a mountainous southwest China county recovering from a recent earthquake. The landslide smothered the Youfang Elementary School and hit two farmhouses in Zhenhe village around 8 a.m., the Yiliang county government said on its website. Another person was buried in a house. [Source: AP, October 4, 2012]

Rescuers rushed from the Yiliang county seat to Zhenhe three hours away to dig out the students, said an official with the county foreign affairs office, Peng Hong. Rain has lashed the region of mountains and sheer valleys, though Peng said the cause of the landslide was not yet known. Yiliang was struck by an earthquake last month that killed 81 people and devastated several villages. Though Thursday was a holiday across China, students were in school to make up for days missed after the quakes, Peng said.

Nineteen Children among 46 Dead in Yunnan Landslide in January 2013

In January 2013, AFP reported: “A desperate search for three people missing in a landslide in southwestern China ended on Saturday when their bodies were pulled from the mud, taking the final death toll to 46 -- many of them children. Authorities in Yunnan province said that the last three bodies were recovered on Saturday morning after a night of frantic efforts by more than 1,000 rescue workers to locate the final missing residents of the remote village of Gaopo. Xinhua said those buried included 27 adults and 19 children. Authorities said families will receive 20,000 yuan ($3,200) in compensation for each victim. Two other people were hospitalised after the landslide struck on Friday morning, engulfing 16 homes, bringing a thunderous crash and throwing up thick clouds of dust, the official Xinhua news agency said. [Source: AFP, January 13, 2013]

Rescuers toiled into the night, braving bitter wind and freezing temperatures, using lamps and specialised detection devices in the hope of locating the missing, Xinhua said. Soldiers, police, firefighters and mine rescue workers joined the search operation, using 20 excavators and trucks, it added. Li Yongju, 50, said she heard the crash of the landslide while cleaning her yard and rushed with other villagers to the disaster site with shovels and hoes. "We pulled out several people, one of whom was breathing weakly. But after a while, he died," Xinhua quoted Li as saying. Zhou Benju, wept as she recounted hearing the rumble of the landslide. "Several relatives of my parents -- my grandma, brother, uncle and my aunt's family members, died," she told the agency.

The landslide was caused by 10 days of heavy rain and snow, steep slopes, unstable soil, and earthquakes that jolted the area in September, according to local geological experts, Xinhua reported. The area may also have been weakened by the presence of a nearby coalmine, the daily Chongqing Chenbao said, although this was denied by a local official at a press conference broadcast on national television. The area has experienced unusually low temperatures in recent weeks during what authorities have called China's coldest winter in 28 years.

The landslide spread over an area 120 metres (yards) long, 110 metres wide and 16 metres deep, according to authorities. Photos on Yunnan Web, run by the Yunnan provincial government, showed rescuers in orange uniforms digging into wide swathes of mud against a backdrop of snow-covered, terraced hills. A video posted on a Chinese social networking site appeared to show a group of villagers digging through thick mud and debris to uncover a body, which was carried away on a stretcher.

Gaopo is in Zhenxiong county, in the northeast of Yunnan, a temperate province known for its tobacco industry and for being the home of Pu'er tea. But its mountainous areas are prone to landslides and earthquakes. Two quakes in September -- one of magnitude 5.7 -- left 81 dead and hundreds injured. A neighbouring county was hit by a landslide in October that killed 18 children, after one that killed 216 people in 1991, according to the United States Geological Survey.

A tidal bore is a big wave induced by a strong high tide that travels up a river. The largest tidal bore in the world occurs on Qiantang River in the Bay of Hangzhou. During the spring a 24-foot wave travels up the river at 15 miles per hour and the noise it generates can be heard 15 miles away.

Typhoons and Drought in China 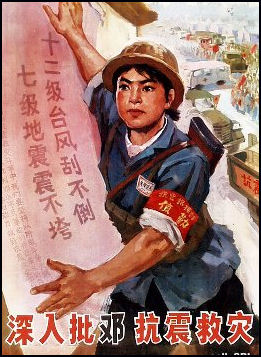 The taiga forests in northern China are incredibly prone to forest fries and the they sometimes spread into Russia. Many are started by careless people, The effort to put them out are hampered by a shortage of firefighting equipment and helicopters.

In June 2006, massive forest fires in northeast China in Heilongjiang Province engulfed more than 50,000 hectares of forest and were battled by more than 20,000 firefighters. The fires were sparked by lightning and linked with below-normal rainfall.