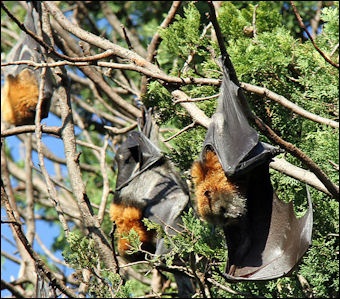 Flying foxes are the world’s largest bats. They are distinguished from other kinds of bats in that, for the most part, they use their eyes not echolocation to locate objects. Flying foxes get their names from their foxy faces and some recent neurological and morphological studies have shown that they may be flying primates.

Flying foxes are also called fruit bats. There are over 200 species of them scattered across Asia, Africa and the South Pacific---but not in the Americas and Europe. They are most common in tropical Asia, Madagascar, Australia and the South Pacific islands. Southeast Asia is home to many species of flying fox. The Malayan flying fox is the world’s largest bat. It has a body the size of a house cat and wingspan up to five feet.

Flying foxes are dark grey, black or brown in color with a yellow or tawny mantle. Their muzzle is long and slender like a fox’s; the hair on their bodies may be up to a foot long; and their fingers may be as long as their arms. Tendons in their feet allow them to hang upside down without effort. They need muscles to let go. They are quite agile climbing through trees but they can’t walk or sit. Their index finger is free from the membrane and is used as a hook when clambers through the branches.

Flying foxes often prefer to roost in narrow strips of fragment forest rather than in large primary forest. David Attenborough wrote: “The bigger species are so large that in order not to lose too much height in take-off, they beat their wings two or three times to lift their bodies from the vertical to the horizontal and then unlatch their feet.” Flying foxes are thought to have made their way to Madagascar by island hopping. 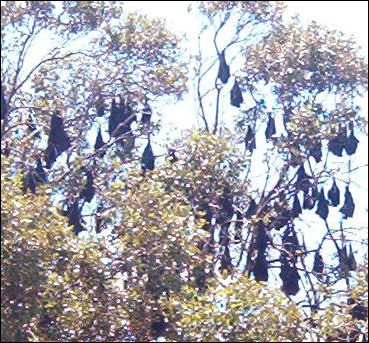 During the day, flying foxes sleep upside down in huge groups in trees with their wings folded around them. Several hundred may occupy a single tree and colonies numbering in the thousands often occupy several trees. In the early 20th century there were reports of flying fox “camps” over 4½ miles long and a mile wide, with millions of animals. When they took off they blackened the sky.

Fruit bats roost in the open unlike other bats which sleep in caves. When they urinate the urine trick;es down their wings and to whatever is below---perhaps another bat. In Australia more than a million of them sill gather in the same place, creating a noisy, smelly ruckus. Usually one or two of flying foxes stay awake to keep an eye out for hawks or snakes---their natural predators. When these bats fly off it alerts the others of trouble.

Each bat needs its own space. Individuals don’t like to touch other bats. The squawking sound that fruit bat make is often the sound of bats bickering over space as they shift around. At dusk the bats leave their roosts. They can take off en mass or fly one after the other.

Fruits bats urinate when frightened. After disturbing a group roosting in a tree National Geographic photographer Carry Wolinsky said, "I feel a warm rain, smelling oddly like the New York City subway." Flying foxes also have a reputation for shitting partially digested fruit all over people who disturb them. 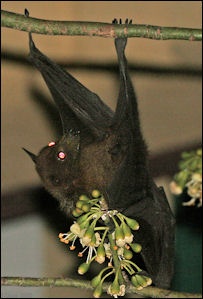 Flying foxes feed primarily on rain forest fruits, figs, nectar and blossoms and, to a lesser degree, tropical fruits like bananas, plantains, breadfruit, and mangoes. Some fruiting plants rely on bats---whose digestive system rapidly processes food without disturbing the seeds---to distribute their seeds through the bat's fecal matter. They also spread pollen like birds and bees in flowering trees. Their long tongues are designed for lapping up nectar. Pollen sticks to their hairy bodies.

The nomadic wanderings of flying foxes is often determined by their search for food. They travel far and wide to find trees that are fruiting or producing nectar-rich blossoms. It is not unusual for a bat to put in 60 miles a night flying from tree to tree in search of food. They suffer greatly when normal fruiting and blossoming patterns are disrupted by droughts, fires or flood. That is often when they are mostly likely to descend on orchards.

David Attenborough wrote: “Some fruit bats feed almost entirely on fruit nectar. Some species of tree rely on them to carry pollen from flower to flower, where they feed. Such trees---among them certain mangroves, cacti and eucalyptus---produce flowers that only open ay night and are white in color and as a consequence are more easily seen by the bats in the night. Many of these blooms stand free of twigs and leaves so that the bats that feed off them don’t entangle their wings. Others hang from long stems and their flowers produces nectar in great quantities but also make a very strong fragrance that the bats are able to detect from long distances.”

“Flying foxes are only incidentally nectar drinkers. Their bulk of their diet is fruit. They may travel 20 miles or more to find trees that are beginning to ripen. Many fruits are so full of water and contain so little nutrition an individual bat can consume its own weight in them in a single day, spitting out the indigestible pulp, swallowing the juice and quickly urinating unwanted liquid. But on the way back to the roost, they may defecate seeds. Fruit bats can devastate a fruit farmer’s entire crop in a day. But they are nevertheless, prime agents in maintainng the fertility of the forest.” 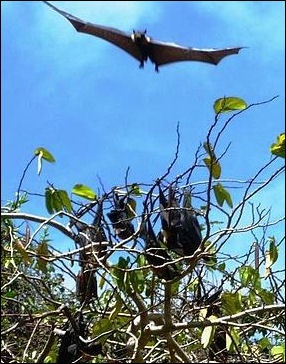 Some species of flying foxes are called epauletted bats because males have large retractable patches of fur that sprout out from pouches in their shoulders during their courtship displays. Female epauletted bats "give birth to a single baby once or twice a year. In some areas these births are closely synchronized with the long and short rains, but in other, births seem to occur throughout the year.

During the mating season males of some species of epauletted bat hang out near street lights flashing the patches of normally hidden fur, secreting attractive odors, singing and honking rhythmically from inflatable sacs in their cheeks and beating their half-closed wings to attract females that apparently need the light to see the males. When rivals land on nearby lamppost the males try to outdo each other by increasing the rate of their calls. The females arrive about 11:00pm and hover about a yard away from the males, checking one out before moving on to the next. When the female chooses the male she wants, her suitor wraps his wings around her so nobody can see.

At dusk mothers carry their babies with them when they fly out to feed, even though, amazingly, some young are two thirds the weight of their mothers and quite capable of flying on their own. The young bat rides clinging to its mother's breast. At feeding sites a baby may fly alongside its mother and even compete with her for food. That same baby may then suckle as it is carried home." During the day nursing young are cradled beneath their mothers' wings, invisible except when they occasionally peek out. 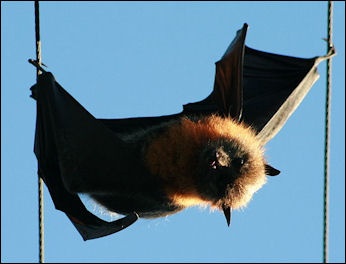 Flying foxes have traditionally been regarded as pests because they make a lot of noise, contaminate water supplies, sometime raid orchards, and generally make a nuisance of themselves. In some places a bounty was placed on killing them. In turn flying foxes often squeal with displeasure when humans are present.

In Australia, they have been shot, poisoned, electrocuted and burned with flame throwers. Burning tires have have been set up below their camps and helicopters, land movers and chains saws have been revved up to produce noise to get rid of them. Some farmers have nets that cover acres of trees. There was even some discussion of introducing typhoid to exterminate them.

But their reputation appears to have been greatly exaggerated. In Australia, in the 1920s, a British biologist was brought in to “discover some whole sale method of destruction which would once and for all relieve the growers of the onus of dealing with the pest.” After his study, the biologist concluded: “The assumptions that the flying fox is a menace to the commercial fruit industry...is quite definitely false...The lose to the commercial fruit crop...is so negligible as to be almost trifling.” Outside of Australia studies have shown that monkeys are often the culprits not bats. Fruit-eating bats only eaten ripened fruit but monkeys will eat unripened fruit.

Flying foxes have been blamed for spreading diseases such as lyssavirus, a close relative of rabies, the Nipah virus, and the Hedra virus. After World War II there were high incidences of dementia among people who lived on Guam and ate large numbers of flying foxes. Later neurologist Oliver Sacks and ethnobiologist Paul Allen Cox examined flying foxes preserved in a museum and found there bodies contained large amounts of neurotoxins absorbed from feeding on cyad seeds. Apparently the animals were unaffected by the toxin but they absorbed enough of them to pass them on to humans who ate them, causing Alzheimer-like diseases.

Some flying foxes and fruit bats are threatened or endangered. Deforestation and loss of habitat has reduced their normal feeding areas and made it more likely for them to raid crops. Large flying foxes are sometimes hunted for their meat, which is considered a delicacy in some areas, and they are easy targets because they often roost in large groups on the branches of large trees or well light caves.